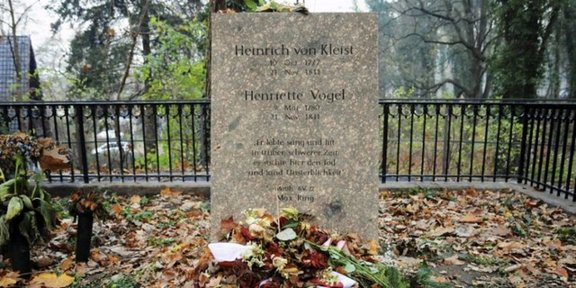 A trip to the Wannsee to see the Kleist grave, the place where Heinrich von Kleist together with his beloved one, Henriette Vogel, committed suicide.
It was a cold, wet afternoon. Immortality might be Von Kleist's, as it is written on the stone, but the passersby appeared to be more interested in tea or soup than in immortality.
Immortality or no immortality, anybody interested in justice - and who isn't interested in justice? - should read his novella "Michael Kohlhaas":

"He was the son of a schoolmaster, and was one of the most honest, while at the same time he was one of the most terrible persons of his period. Till his thirtieth year this extraordinary man might have passed as a pattern of a good citizen. In a village, which still bears his name, he held a farm, on which, by means of his business, he was enabled to live quietly. The children whom his wife bore him, he brought up in the fear of God to honesty and industry; and there was not one among his neighbours who had not felt the benefit of his kindness or his sense of justice. In short, the world might have blessed his memory had he not carried one virtue to too great an extreme. The feeling of justice made him a robber and a murderer."

The feeling of justice made him a murderer, how timely, how right. If there is a feeling that turns decent citizens into murderers it must be this feeling of justice. And a sense of duty of course, that helps. It's rare to see a murderer who takes pleasure in killing.