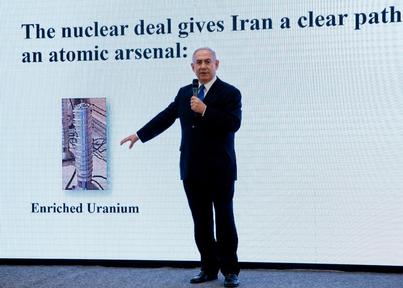 Anshel Pfeffer in Ha'aretz with a devastating review on Netanyahu's press conference:

'He [Netanyahu] missed only one thing: Crucial dates that could prove Iran has actually done anything in contravention of the Joint Comprehensive Plan of Action (JCPOA) since it was signed in 2015.
Extrapolating from the fact that Iran has continued to maintain and hide this nuclear archive, and that the same people mentioned in the files are still around, doesn’t necessarily mean there’s a “shadow” weapons program still going on. Of course, there very likely is, but Netanyahu offered no proof of that. What he had wasn’t a smoking gun but a photograph of a smoking gun taken years ago.'

An old smoking gun yes, but it's still possible that we are heading towards an Iranian-Israeli war, which might spread quickly to other countries. No Iran doesn't want an all-out war, Israel doesn't want a war but we know this: sometimes leaders haven't built up their appetite for war yet, and still more or less unwillingly they start a war.