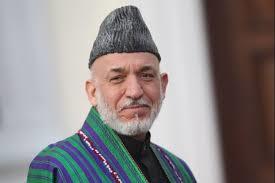 Remember Karzai? Well, he is back, at least in Der Spiegel, and he might run again:

SPIEGEL ONLINE: From the perspective of the West, the war in Afghanistan cannot be won. Yet it hasn't come to an end. Why not?

"Hamid Karzai: Initially, after the tragedy of September 11, we succeeded very, very well. Afghanistan was liberated from the Taliban, women won back their rights, institutions were built. But when it comes to the fundamental reason for the intervention in Afghanistan -- the defeat of terrorism and extremism -- we failed together and we failed miserably. The loss of Afghan and international lives, and of property and much more, has been massive. On top of that, the extremists have grown by the thousands and we now have the Islamic State operating in Afghanistan. How do you explain this to the Afghan people? How do you explain this to the American people? How do you explain this to the German people? Or to our neighbors? How come, after all that sacrifice, after all that money spent, we don't have anything to show for it?

SPIEGEL ONLINE: What consequences do you draw from this bitter insight?

Hamid Karzai: The only solution to the conflict in Afghanistan is through peaceful means -- political solutions which have to include everybody, even the Taliban. We are willing, as a nation, to forgive all that has happened. Everyone involved needs to come together. We need a new beginning and a new contract. When the U.S. came to Afghanistan with its allies, we had the perfect cooperation of major powers: Russia, China, Saudi-Arabia, Iran. One reason for the initial success in Afghanistan was that cooperation. Today, unfortunately, that cooperation has given way to suspicion and rivalry. Now they try to weaken each other in Afghanistan. And the price is always paid by the Afghans."

"SPIEGEL ONLINE: Afghanistan is holding elections in May 2019. Are you going to run against President Ashraf Ghani?

Karzai: I was a democratically elected president. I left a legacy and I don't want that legacy to become tainted. The Afghan constitution only allows two terms.

SPIEGEL ONLINE: Some legal scholars interpret the constitution differently, arguing that a president has to take a break after two terms, but can run again afterwards.

Karzai: If there is an absolute need for it, and if all political groups agreed, why not?"

Shortly after the American invasion in the fall of 2001 things were already not going that well. I remember people telling me not long after Karzai took office in december 2001 that Karzai was at best the mayor of Kabul. The absurdities of the NATO-operations must have been clear to everybody visiting the troops in Afghanistan.
The collapse of the Soviet-Union started there, perhaps one day people will say: the collapse of the West started in Kabul and its surroundings.