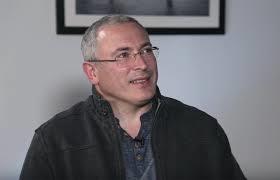 DER SPIEGEL: Do you expect changes in the next few years, even before the end of Putin's term of office in 2024?

Khodorkovsky: Realistically speaking, little is likely to change. But I do believe Putin is capable of change, even if the odds are slim.

DER SPIEGEL: What do you think of former German Chancellor Gerhard Schröder's involvement in Russia? He's also now on the supervisory board of Rosneft, the oil company of Putin's confidant Igor Sechin.

Khodorkovsky: I do not approve of Schröder's behavior, but I do understand it. Putin helped him adopt two children, so he feels a deep sense of personal gratitude. The result being that he convinces himself that Putin is not as bad as everyone says. Putin has done a good job at this -- he's a professional when it comes to recruiting. Today, Schröder is a person who has no influence on Putin, but through him, Putin can influence a segment of German society.

DER SPIEGEL: What influence does Vladimir Putin have on Donald Trump? Do you think the Kremlin actually has any compromising material against him?

Khodorkovsky: I don't believe there is material of importance in Moscow. Trump is not the kind of man you could put in jeopardy with stories about women. And as far as financial ties with Russia are concerned, they would have to be at such a high level that the FBI would have noticed.

'Khodorkovsky: I don't believe that either. To me, Trump is an extravagant businessman who wants to transfer his experience from the business world to the system of government. When inappropriate methods are transferred to a new object, a conflict arises -- and this is similar to the conflict that arises in Putin's system, where a mafioso group is trying to lead a country. Essentially, they are quite different. The similarities are purely on the surface.

DER SPIEGEL: Russia is in a difficult situation. In contrast to those imposed by the European Union, the U.S. Congress has ensured that American sanctions against Russia are very difficult to lift. What would you do if you were in government?

Khodorkovsky: I would say, I don't care about sanctions in the first place. I can export oil and gas anyway, and the West will not be able to do without them, so these revenues will still be mine. I would also take a calm view toward the ban on importing certain technologies. Russia is so economically ineffective that it is unable to use cutting-edge technology anyway. The slightly older models that we are still able to get suffice for our purposes. What would worry me is the lack of human potential. The most productive people are leaving the country and foreign experts are no longer coming. It's also a question of reputation.'

'DER SPIEGEL: You've lived in London since 2016. Are you watching the World Cup on TV there?

Khodorkovsky: I used to play football, but I have never really become a fan. If the Russian team reaches the quarterfinals, though, I'll watch. Emotionally, I'm still Russian.'

This how you win the human heart, children or love (women). And Putin is capable of change, he will only change when circumstances force him to change. The fact that quite a few Russians would like to leave their country is not enough. The Sovjet-Union could survive for decades while quite a few citizens longed to leave the country.

Putin won't change, he will burn himself before he can change.