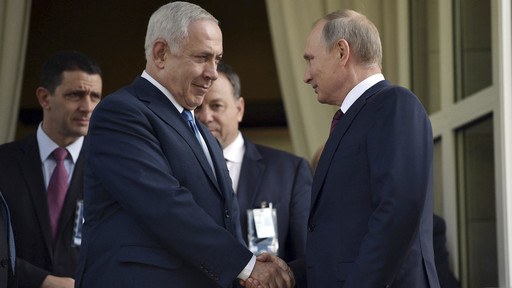 Amos Harel in Ha'aretz on the Russians, mistakes, revenge and unintended consequences:

'The incident in the Syrian skies on Monday night has now put Israel in an extremely difficult position with the Russians, and is liable to negatively influence the strategic freedom of action its air force had enjoyed on the northern front until now.
This is true even as Russian President Vladimir Putin absolved Israel of downing the aircraft, saying the incident was a result of a "tragic chain of circumstances."
Israeli fighter jets attacked Iranian-related targets in Syria. Syrian aerial defenses tried to thwart the Israeli attack and accidently hit a Russian Air Force plane with a Russian-made missile.'

'Netanyahu will have to draw on all his diplomatic experience and skills in the coming days to calm tensions with Moscow. If Russia decides to demonstrate a hard line for an extended period, it is capable of interfering with Israel’s freedom of action in the Syrian skies.
This is a critical matter for Israel, since the Iranians will be keen to exploit any break in air force activity to increase the smuggling of arms to Lebanon and to bolster their military presence in Syria.
Israel has sparked this crisis with Russia, albeit completely unintentionally, in a way that is liable to influence the situation on the northern front. Considering the scope of the attacks that have been reportedly lately, perhaps it is surprising that things didn’t go awry sooner.
In the months after the Turks downed the Russian plane in Syria, Turkey suffered a series of mysterious cyberattacks. The Russian announcement on Tuesday morning about maintaining the right to respond to the killing of its soldiers should certainly set off alarm bells in Israel’s cyberdefense units as well.'

Above all, this article illustrates who is the true master in Syria: Russia. This might change, but Syra has not been yet Russia's Vietnam, not even its Afghanistan, and I would say that Putin and his generals are capable of outfoxing their enemies, especially the West.