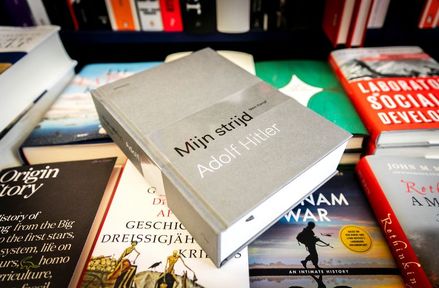 About "Mein Kampf" as a besteller in the Netherlands - Shai Simpson-Baikie in Ha'aretz:

'The bookseller at Scheltema says she hasn’t seen any “neo-Nazis with shaved heads and scary tattoos” come in to buy “Mijn Strijd.” Moreover, she finds it unlikely that people who nourish dangerous ideologies will seek out the book.
“People with hateful intentions are intellectually lazy and it’s unlikely they will spend the time and money to actually read the book,” she says.
Van Vree echoes this sentiment and notes that racists or anti-Semites already knew where to find the book. “Copies were already available in scholarly libraries and neighboring countries like Belgium, and could easily be downloaded from Dutch and other neo-Nazi websites, often hosted in the United States,” says van Vree.
Moreover, he says he finds it highly unlikely that the book will cause an uptick in racism or anti-Semitism. “They generally don’t need books to be persuaded. One may even doubt whether any German in the 1920s was turned into an anti-Semite just by reading Hitler,” he adds.
The bookseller at Scheltema characterizes the majority of people buying “Mijn Strijd” as “learned types, old men who study war and wear long raincoats – you know the sort.” A bookseller at Athenaeum says some people asking for the book feel the need to apologize, explaining that they don’t agree with Hitler’s ideology.
Despite her concerns about “Mijn Strijd,” Luden says the book does have the potential to increase knowledge about the horrors of the Holocaust. While education about that period is on the decline, she says, she has observed a growing trend toward remembrance and memorials, and says the book may help.'

Last week over dinner with booksellers some of them told me that there were some "oddballs" coming in the bookstore, asking for Mein Kampf.
No, the anti-Semites don't need this book to defend their antisemitism and others won't be convinced by the text, the seductive quality of "My Struggle" is limited, but it's a debut of course.