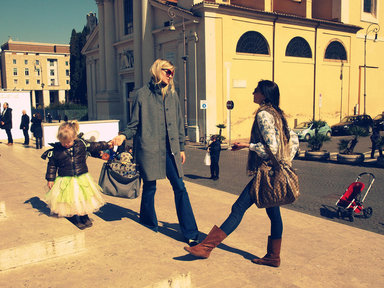 'What is currently happening in Rome is akin to a pre-announced killing spree. Italy's net debt burden is, in absolute numbers, the third-highest in the world, and is, measured in the context of its economic performance, more than double what is allowed in the eurozone. Nevertheless, according to the Ipsos research institute, Salvini's and Di Maio's plan, which seeks to finance government handouts with ever higher debts, is creating elation among voters.

That may have to do with the fact that many Italians don't read any newspapers -- at least not foreign ones. Romano Prodi, former head of the Italian government and the European Commission, however, is aware of the country's critical situation internationally. Prodi says the people in power in Rome are behaving like the "owners of an entire country." He argues that an old Naples saying offers a guide for dealing with Brussels: "He whose derriere is barely above the ground shouldn't dance ballet." And Italy, he says, "currently has its derriere hanging very low."

One thing that is clear in these chaotic days in Rome is that the euphoria of the enthusiastically tweeting, posting and talking government leaders is a far cry from the dire analyses of those in the EU who are sympathetically, but cool-headedly, observing Italy -- the country with the lowest economic growth in the bloc. They are watching as Deputy Prime Minister Di Maio celebrates a budget financed on credit as if Italy had just become the world champion in soccer for the fifth time.

The only things more over the top than the M5S politician's triumphant gestures and tirades ("This Europe is at its end") have been Salvini's appearances after his decree on "security and immigration" was signed by the president. That's when Italy's interior minister fanned out on Facebook and on TV as if wanting to confirm the beliefs of those who think he is a megalomaniac. He spoke of himself in the third person -- "the decree from this villain of a deputy prime minister" -- and sent on-camera kisses to his critics.'

Ballet while your derriere is hanging very low, it's not easy to find a better description for Italy, and for a few other countries in the West. 2018? Futurism without the genius of the futurists.