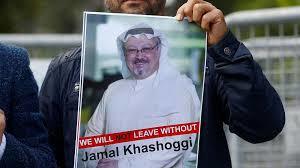 Megan Specia in NYT on the reasons why the murder of Khashoggi has become a "top story":

'Beyond the geopolitical fallout and the international implications, there is no denying that for many people, Mr. Khashoggi’s death has hit home on an emotional level.

Madawi Al-Rasheed, an expert on Saudi Arabia and a professor at the Middle East Centre of the London School of Economics, wrote in a recent column that the killing has seemed to capture Western attention in a profound way. Taken alone, she said, the circumstances around his death are enough to be a “a legitimate source of outrage.”

“This would be murder by a state — or the organs of a state — of an unarmed journalist, without judicial process, on diplomatic ground outside the territory of the perpetrators’ country,” Dr. Rasheed wrote. “It is this dreadful cocktail of circumstances that explains the general outrage that it has sparked.”'

This mainly has become a top story because a few state actors (rightly) believed that they had something to gain from Saudi Arabia's blunders.