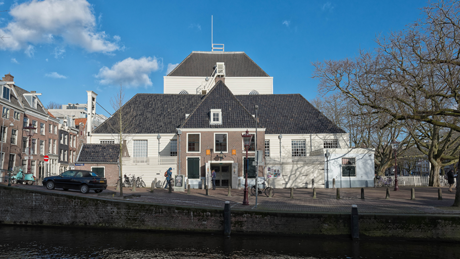 An evening with Yra van Dijk, who wrote a monograph about my novels.
We discussed Adorno, but Yra said: "It feels like that I'm defending my dissertation all over again."

So within thirty or forty minutes, it was time to drink wine. A bit more Adorno here to make up for the lack of Adorno last night:

"We point out the transition of civilization into analphabetism and ourselves forget to write letters or to read a text of Jean Paul, as it must have been read in his time. We abhor the coarsening of life, but the absence of any objectively binding common decency [Sitte: morals] compels us at every step into modes of conduct, speech and calculation which are barbaric, measured by humane standards, and tactless, even by the dubious standards of the good society. With the dissolution of liberalism, the authentic bourgeois principle, that of competition, was not overcome, but passed over from the objectivity of social processes into the composition [Beschaffenheit: character, constitution] of pushing and shoving atoms – into anthropology, as it were. The subjugation of life to the production-process degradingly inflicts something of that isolation and loneliness on every single person, which we are tempted to consider the matter of our superior choice. The notion that every single person considers themselves better in their particular interest than all others, is as long-standing a piece of bourgeois ideology as the overestimation of others as higher than oneself, just because they are the community of all customers. Since the old bourgeois class has abdicated, both lead their afterlife in the Spirit [Geist] of intellectuals, who are at the same time the last enemies of the bourgeois, and the last bourgeois. By allowing themselves to still think at all vis-a-vis the naked reproduction of existence, they behave as the privileged; by leaving things in thought, they declare the nullity of their privilege. The private existence, which yearns to look like one worthy of human beings, simultaneously betrays the latter, because the similarity of the general implementation is withdrawn, which more than ever before requires an independent sensibility [Besinnung]. There is no exit from the entanglement. The only responsible option is to deny oneself the ideological misuse of one’s own existence, and as for the rest, to behave in private as modestly, inconspicuously and unpretentiously as required, not for reasons of good upbringing, but because of the shame that when one is in hell, there is still air to breathe."

To deny oneself the ideological misuse of one's own existence, I can only understand this as: surviving is not an ideology, we should not mistake the act of surviving for ideology, and beyond that, we are all at the mercy of others, in other words, the consumers.