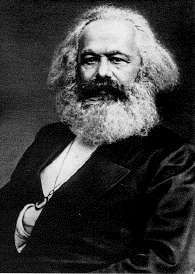 Jonathan Wolff in TLS on the Marx industry (Sven-Erik Liedman's "A World to Win - the life and work of Karl Marx and a few other books):

'There are many Marxes, even more Marxisms, and therefore there is an unending potential for writing something new and original. But for thinking about Marx there is no time like the present.'

'Unfortunately, nowhere in his writings, published or unpublished, did he devise a clear account of capitalism’s economic demise and its replacement with communism. What does he achieve? Perhaps that capitalism has a dirty secret. It is fundamentally unjust, surviving only through the exploitation of the worker. But Marx always distanced himself from moral critique. Could it be that he was, as he says, simply trying to “lay bare” the laws of capitalism? The Cambridge economist Joan Robinson remarked that Marx’s dynamic, historical perspective is full of “penetrating insight”. Yet that alone hardly seems to justify the cult of Marxism or his influence in the twentieth century. What, then, is the secret of Marx’s success?'

'Despite the considerable merit of these books, none of them solves the puzzle of Marx’s career. Why didn’t he push his analysis of capitalism to the stage where he could identify the mechanism by which it would break down? We can only speculate.'

Waiting for capitalism to break down, waiting for the miracle, that's uniting us. Some of us wait more or less eagerly while eating pain au chocolat, others write books against capitalism that can be bought on Amazon (among other places), some people try to postpone the breakdown, others write every day on Twitter that we should get rid of capitalism. It's not very much in vogue anymore these days to bomb supermarkets in order to hasten the demise of capitalism. Those who are marching against it (in the West) would like to arrive timely at the door of the kindergarten in order to pick up their little beloved ones.