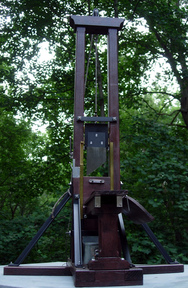 Francois Furstenberg writes in Monday’s Herald Tribune: ‘Though it has been a topic of much attention in recent years, the origin of the term "terrorist" has gone largely unnoticed by politicians and pundits alike. The word was an invention of the French Revolution, and it referred not to those who hated freedom, nor to non-state actors, nor of course to "Islamofascism."
A terroriste was, in its original meaning, a Jacobin leader who ruled France during la Terreur.’