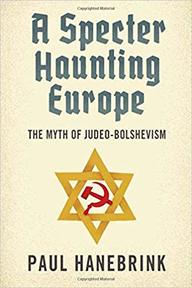 A very important and interesting review by Christopher R. Browning on "A Specter Haunting Europe: The Myth of Judeo-Bolshevism" by Paul Hanebrink.

'One of the great merits of Paul Hanebrink’s A Specter Haunting Europe is its demonstration of how Europe’s most pervasive and powerful twentieth-century manifestation of anti-Semitic thought—the myth of Judeo-Bolshevism—emerged before the rise of National Socialism and has continued to have a curious life long after the Holocaust and the defeat of Nazi Germany. Hanebrink’s approach is not to repeat what he considers an error of the interwar era—the futile attempt to refute a myth on the basis of historical facts and statistical data. A small kernel of truth underpinned the stereotype of the Jewish Bolshevik: a number of well-known early Bolshevik leaders (Béla Kun, Leon Trotsky, Karl Radek, and others) were of Jewish origin. That Stalin killed almost all of them, that overall a very small percentage of Jews were Bolsheviks, and that many prominent non-Jewish revolutionaries (Lenin and Karl Liebknecht, for example) were mistakenly identified as Jewish had no countervailing impact, because, Hanebrink writes, the Jew as “the face of the revolution” was a “culturally constructed” perception.

Trying to discredit powerful political myths with mere facts, as we know all too well today, is a frustrating endeavor. Thus Hanebrink seeks instead to understand the historical background and the “cultural logic” of the myth of Judeo-Bolshevism—how it functioned and morphed through different phases. Ultimately Judeo-Bolshevism embodied, in the form of “Asiatic barbarism,” an imagined threat to national sovereignty, ethnic homogeneity, and Western civilization conceived as traditional European Christian hegemony. It fused, in short, political, racial, and cultural threats into a single “specter haunting Europe.”'

'In short, Judeo-Bolshevism had returned as an essential component of the memory wars, and the Holocaust scholarship and civics pedagogy of the West were seen as national defamation in countries like Poland, Hungary, Romania, and the Baltic States. The explosive impact in Poland of Jan Gross’s book Neighbors (2000), which documented the participation of Polish villagers in the massacre of the Jews in Jedwabne, the bitter public debate and discomforting historical research by younger Polish scholars that followed, and the notorious 2018 law banning the attribution of Nazi crimes to the Polish nation illustrate this dynamic of reacting to Holocaust scholarship as national defamation.

In his conclusion Hanebrink argues that the myth of Judeo-Bolshevism is no longer a threat driving Europeans to panic, but rather has been relegated to the politics of contested memory. Unfortunately, I fear that the rantings and conspiracy theories disseminated by the likes of Viktor Orbán against George Soros and the allegedly Jewish forces of globalization, and the chants of “Jews will not replace us” by white supremacists in Charlottesville, demonstrate that anti-Semitism, even if not specifically in the form of Judeo-Bolshevism, still has traction. But Hanebrink is correct, I think, to argue that the myth of Judeo-Bolshevism has been supplanted by another perceived threat likewise constituted from a fusion of race, culture, religion, and political ideology. This is the “Islamization of the West,” embodied in the influx of Muslim immigrants who are considered dangerous, alien, disloyal, extremist, and unassimilable, and thus once again threaten the survival of national sovereignty, ethnic homogeneity, and Western civilization. In place of Judeo-Bolshevism, a new hybrid specter—“radical Islam” or “Islamic terror”—is haunting Europe.'

Mr. Browning's conclusion is very much to the point, the myth of Judeo-Bolshevism faded away, for many different reasons as Mr. Browning pointed out, but yes Soros and Orbán are examples that this myth has not completely died.

But Judeo-Bolshevism in the West has been largely replaced by "Islamic terror", those who want to preserve ethnic homogeneity use the same tactics as have been used by the fighters against Judeo-Bolshevism, they are keen on disguising myths as facts, they use and abuse statistics (overrepresentation) to cement the image of an enemy.

Another minority, another enemy, the same tactics. The same goal: ethnic homogeneity.