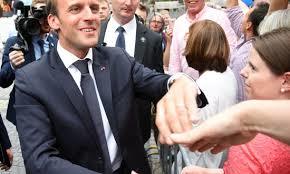 On France and Germany, and weapons - der Spiegel:

'But their differences rarely surface as openly as they did in last week's conflict over the Nord Stream 2 natural gas pipeline. The French had long embraced a neutralité politique, as they call it, to avoid sabotaging the German-Russian plans. But only a few weeks after the declarations of mutual devotion in Aachen, the two countries came within a hair's breadth of a major diplomatic spat.

The evening before a vote on a contentious EU directive that would have severely impeded the gas project, the French Foreign Ministry released a statement that left officials in Berlin completely taken aback.

"France intends to support the adoption of such a directive," it said in the press release. The Foreign Ministry showed little sympathy for the shocked reaction in Berlin, adding that the Germans were well aware of French reservations concerning the project, "but perhaps didn't want to hear them."

Nord Stream 2 symbolizes the utter lack of mutual understanding between both countries and how divergent the political approaches of the two partners tend to be. This is also painfully apparent in the conflict over a joint security and arms exports policy.'

'These diametrically opposed views also clash on the issue of arms exports. France sees arms sales, even to problematic customers like Saudi Arabia, as a perfectly justifiable policy in defense of its national interests -- in other words, a raison d'état. Germany, on the other hand, places far more restrictive limits on exports of military hardware.

Before the signing of the agreement in Aachen, diplomats and state secretaries from Paris and Berlin argued for months over the question of whether strict German regulations on global arms sales should also apply to joint Franco-German defense projects.

They ultimately had to resort to a secret agreement, signed at the beginning of the year, to keep the talks from failing. This was evidently modeled after the Schmidt-Debré accord, which was signed in 1972 by then-German Defense Minister -- and later German Chancellor --- Helmut Schmidt and his French counterpart, Michel Debré. The agreement stipulated that neither side could block the export of jointly developed weapons systems.'

Whether Germany sees arms export as a raison d'état as well, maybe, but the raison d'état remains always to protect business interests, also the interests of weapon manufacturers.

And Trump might be able to bring France and Germany closer together. Necessity remains the cornerstone of friendship, and of love.