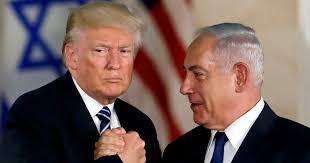 Chemi Shalev on Netanyahu and a dress rehearsal:

"Benjamin Netanyahu’s response to Attorney General Avihai Mendelblit’s Thursday announcement of his impending indictment on charges of corruption should be viewed by Americans as a dress rehearsal for the benefit of Donald Trump. Netanyahu wrapped Trump’s familiar railings against the rule of law and its administrators in a polished and eloquent package, but the song remained the same: An innocent man hounded by sinister political enemies out for his head, at any price.
If reality bites, Netanyahu essentially urged his citizens, you can change it. Rather than account for the mountains of evidence that point to his alleged greed and corruption, Netanyahu concocted an Israel in which the rule of law has been suborned to serve the left and its lackeys. Instead of bowing his head to the supremacy of the legal system and vowing to prove his innocence in court, as might be expected of anyone than Trump and/or Netanyahu, the prime minister is, in essence, pushing his people to vote for a putsch. It will start if and when he wins the April 9 elections."

"These are now the stakes, which may have never been higher. If Netanyahu is reelected in less than 40 days, it will not only be seen as a personal vote of confidence and public vindication. He will be given a mandate to overturn the rule of law, disperse its remaining adherents in the legal apparatus, and detach Israel from the constitutional underpinnings that have held it together since its inception. If he succeeds, America should be put on notice: Trump will soon emulate his good friend and follow him into the twilight zone that exists only in the distorted mirrors of their minds."

Pushing his people to vote for a putsch, the same can happen in the US indeed. We will see whether Netanyahu succeeds in the dress rehearsal on April 9, if he does, we have may have seen the future. But I remain cautiously optimistic, pessimism is a luxury these days.