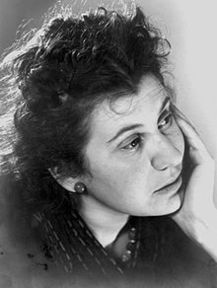 A friend sent me this article about Etty Hillesum by Emma German in he Paris Review:

'Hillesum hankers after neither marriage nor children. Mainly, she’s wary of passing on her family’s “taint”: the psychiatric problems suffered by her two younger brothers. Like their sister, both are geniuses. Mischa, a classical pianist, did a public performance of Beethoven at age six, and Jaap is a doctor who discovered new vitamins while still in his teens. But Jaap’s severe depression has led to several stays in hospital, and Mischa has schizophrenia. Hillesum writes: “When Mischa got so confused and had to be carried off to an institution by force and I was witness to the whole horror of it, I swore to myself then that no such unhappy human being would ever spring from my womb.” On realizing she’s pregnant, she doesn’t hesitate to self-abort by taking twenty quinine pills, supplemented “with hot water and blood-curdling instruments.” She tells the embryo: “I shall bar your admission to life, and truly you should have no complaints.” Within days, Hillesum is back to translating The Idiot, having sex with Han, and enjoying “a feeling of being at one with all existence.” It might be the most cheerful and pragmatic depiction of abortion in the whole of literature.'

'Tzvetan Todorov, in his book Facing the Extreme: Moral Life in the Concentration Camps, argues that, ultimately, “her fatalism and passivity lent themselves to the murderous project of the Nazis.”

It’s a fair response to Hillesum’s Tao-like creed of pure acceptance. But she always felt, given the Nazi systemization of mass murder, that scrambling to survive would be like “crowding onto a small piece of wood adrift on an endless ocean after a shipwreck and then saving oneself by pushing others into the water and watching them drown.”'

My mother was of course fifteen years younger than Hillesum and she left Westerbork later, in January 1944.
And my mother, besides all the other differences, was more keen on survival than Hillesum.
But a profound sense of happiness can be found in my mother's memories as well:

A young German soldier says to my mother in a factory near Dresden where she has been put to work, it must have been the end of 1944, that he would have loved to take a walk with her if it had been peace, and he offers her some of his bread and sausage. She writes that she exulted for joy.