On a Sunday afternoon 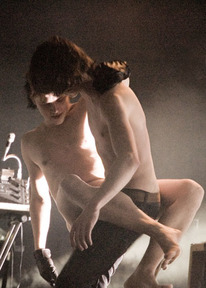 This afternoon I saw “Salo or the 120 days of Sodom” directed by Pasolini.
The Walter Reade Theater was less crowded with old ladies than usual on a Sunday afternoon, but nevertheless the movie was sold out.
Having read “The 120 days of Sodom” by Marquis de Sade; I must say that the book is slightly more abstract than the movie and therefore less confronting.
In Pasolini’s movie the action takes place in the Republic of Salò, in the midst of Italian fascism and Nazism.
I’m not sure if there is a line between the radical libertinism as expressed by Marquis de Sade and fascism, but Bertolucci made in “1900” a similar point; sexual sadism and fascism are intertwined.
I was wondering how much of the audience knew what kind of movie they were going to see. And I have to admit that I was afraid to move because I didn’t want to touch the lady next to me.
The audience is watching the violence through the eyes of the perpetrators, is peeping together with them. Which provokes questions as: is watching sadism titillating whether we like it or not and has sadism by nature a sexual connection.
The average orgy seemed to me innocent after having seen this movie.
Instead of participating in an orgy I went to an Italian restaurant and ordered tripe.