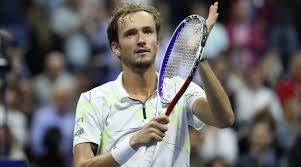 Louisa Thomas in The New Yorker on suffering and tennis:

'By then, Medvedev had become the antihero of the tournament, a viral sensation. In the quarterfinals, he faced Stan Wawrinka, and he walked onto the court to a chorus of boos. They sounded softer this time, though—it’s hard to sustain a W.W.E. atmosphere at a tennis match, even in New York. The outrage, by then, was mostly in fun; many people in the stands probably didn’t even know how it had started. And Medvedev had again taken steps to change people’s perception of him. He posted heart emojis on Instagram. He took responsibility for his faults. “I got what I deserved,” Medvedev said of the boos after his match against Wawrinka. “Usually I’m not like this, as I was in the third-round match. I’m not proud of it. I’m working to be better. Hopefully I can show the bright side of myself.”

But more interesting than Medvedev’s inconstant persona were the shades and shadows of his game. His shots are flat and a little odd—one moment soft and angled, the next sent hard to the back of the court. He has a big first serve, and a big second serve—sometimes. He does not allow his opponents to get in rhythm. And the worse he is feeling, the more creative he seems to get. Against Wawrinka, he appeared, at several moments, to be in great pain. He called the trainer out to tape his quadriceps. He called the trainer out to cut off the tape. He hit nine double faults—in just the first set. He appeared, for entire games, barely to try to reach balls that landed at any real distance from him. He won the match 7–6 (8), 6–3, 3–6, 6-1. He was magnificent.'

What else can you become if you have serious ambitions? The antihero of the tournament. Sport without melodrama is mainly nothingness.