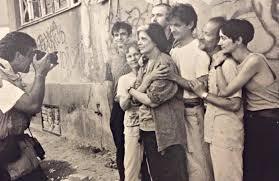 NYRB excerpted "Sontag: Her Life and Work" by Benjamin Moser:

"Godot did answer some of Sontag’s essential questions about the usefulness of modern art. It did not save the boy on the bike. Nor did it usher in military intervention. But she found a way to offer everything she had, following Vladimir’s exhortation in Act II:

Let us do something, while we have the chance! It is not every day that we are needed. Not indeed that we personally are needed. Others would meet the case equally well, if not better. To all mankind they were addressed, those cries for help still ringing in our ears! But at this place, at this moment of time, all mankind is us, whether we like it or not. Let us make the most of it, before it is too late! Let us represent worthily for once the foul brood to which a cruel fate consigned us!

If a condition of the modern artist—of the modern person—is an awareness that Godot will not be turning up, that does not mean that that person is not needed, cannot make some difference. Sontag’s determination to make that difference made her exceptional, and after her death, the plaza in front of Bosnia’s National Theater was named Susan Sontag Square."

The person who won't be turning up is very much needed indeed. If this is the condition of the modern artist - whatever we mean by modern - then this artist is fairly Christian (or Jewish for that matter) with a heavy touch of Kierkegaardian irony.

The war in Yugoslavia was outside Yugoslavia forgotten very soon, 9/11, Afghanistan, Iraq overshadowed this war quickly and the International Criminal Tribunal for the former Yugoslavia faded out.

I visited Sarajevo in July. A dozen tourists were listening to a guide near the street corner where Archduke Franz Ferdinand was killed. Sarajevo is not yet a popular tourist indication, which is another indication that its history is mainly forgotten. Another small example of irony, but not Kierkegaardian irony.