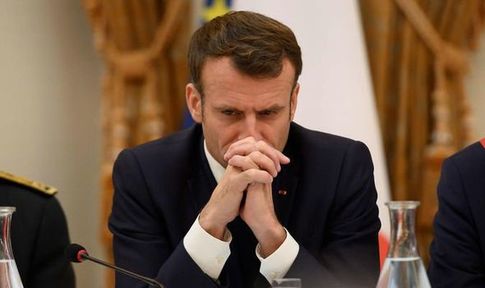 'The message Macron was trying to send by quoting the Hungarian intellectual was relatively clear. I, Emmanuel Macron, he seemed to be saying, did nothing more in my widely criticized interview with the Economist than take a fresh look at our crisis-ridden present and draw my own conclusions. Part of that exercise was casting doubt on NATO's functionality and on the readiness of the Germans to work toward establishing a strong, sovereign Europe.

Rarely has an interview triggered as much consternation in Europe as Macron's sit-down with the Economist, which hit the newsstands last Thursday. In the piece, the French president posited that NATO has suffered from "brain death," questioned whether NATO's Article Five is still functional and warned of a possibly apocalyptic future for Europe.

Allegedly, say sources in Paris, the French Foreign Ministry was only informed of the content of Macron's interview with the Economist 48 hours before it was published. Berlin, meanwhile, was blindsided. Ahead of Macron's famous 2017 speech at the Sorbonne, where he laid out far-reaching proposals for the EU's future, German Chancellor Angela Merkel had received an advance copy. But on this occasion, she was caught unawares.

"You always have to ask how trust develops," said one German diplomat. "This isn't it."

Still, the German government very much shares Macron's doubts about the effectiveness of the trans-Atlantic alliance. But calling Article Five into question, NATO's foundational article that requires all alliance members to help out if one member is attacked, is something one would tend to expect more from someone like U.S. President Donald Trump.'

'Macron was similarly isolated at the EU summit in mid-October, when he blocked the beginning of accession negotiations with North Macedonia by making use of his veto. Outgoing Commission President Jean-Claude Juncker referred to it as a "historic mistake" that could endanger the Balkan country's stability. Merkel likewise said pointedly that the EU had to "remain reliable."

Insiders say that it only became clear how Macron would vote on the issue just one day before EU heads of state and government gathered for the summit. When Chancellery staff inquire at the Élysée as to why they aren't always kept informed, they sometimes receive answers that they have thus far only associated with the Trump administration in Washington: Élysée staff, they hear, only has limited influence over the president.'

Being a good team player has never been among his top priorities. Perhaps he has simply read a bit too much Victor Hugo: "Ceux qui vivent sont ceux qui luttent," he wrote. "Those who live are those who fight."'

The NATO might be brain-dead, but when was the last time that NATO was alive and kicking? Thirty years ago when the wall fell? A diagnosis without much of a remedy is rarely a solution, especially not in politics.
With good arguments one could declare that liberal democracy is brain-dead, but what's the alternative?

Politicians and doctors have something in common: they are supposed to prolong the patient's life.

Macron wants to build a new hospital because he believes he can do better work in that new hospital. One could admire him for that, but to build a hospital alone is a bit absurd. Macron is not gone unsound, as some of his colleagues, but he appears to suffer from hubris.