The beginning of a disaster 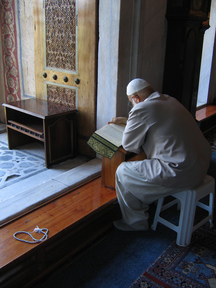 In this week’s New Yorker Caleb Crain writes a long article with the subtitle “What will life be like if people stop reading?” – Caleb Crain is by no means a cultural pessimist, but his optimism is subdued: “The antagonism between words and moving images seems to start early. In August, scientists at the University of Washington revealed that babies aged between eight and sixteen months know on average six to eight fewer words for every hour of baby DVDs and videos they watch daily. A 2005 study in Northern California found that a television in the bedroom lowered the standardized-test scores of third graders. And the conflict continues throughout a child’s development.” Parents should be warned: cigarettes, lack of condoms and bad teachers are not the only dangers, a television in the bedroom might be the beginning of a disaster as well.
My parents, as I reported before, were very much against television. Sometimes my mother complains: “Don’t you have any positive memories about me and your sister?” Finally I know the answer: “The lack of television.” For the record my parents opposed cars as well. My father loved public transportation as much as he loved his own family.