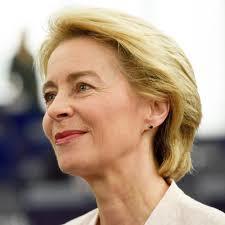 'DER SPIEGEL: The Brexiteers have promised that the United Kingdom will be better off without the EU. If Brexit is, indeed, successful, it could become something that populists from other countries in Europe will seek to emulate.

Von der Leyen: It's not the countless promises that matter, but reality. The Brexit drama has already become a bitter lesson for all those populists who have fantasized about leaving the EU. One after the other, they have silently buried their erstwhile strident demands for "Grexit," "Dexit" or "Frexit." Over the last five years, the international situation has shown that it isn't helpful for any country to stand completely on its own. The EU must now forge ahead. Brexit has cost a lot of political capital. Just think of the many nights in the European Council during which Brexit was discussed instead of important issues like the climate, migration or the further integration of the internal market.'

Well, a bitter lesson, but not bitter enough for the electorate of the United Kingdom to get rid of Mr. Johnson, thanks of course to Mr. Corbyn.

Brexit was an extreme boost for the EU, but the bitter lessons of it won't last long to keep the status quo from crumbling. A bit more is needed than the stupidity of your enemies.