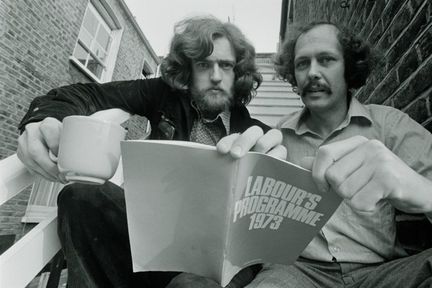 On the occasion of Brexit, finally, we waited for it such a long time and now it is here, it seems te be overtaken by an impeachment process petering out and a Corona virus not yet petering out - here's James O Brien on Corbyn in TLS, almost six months ago:

'The surprise pivotal player here turns out to be Byron Taylor, a Labour councillor in Basildon with a trade union background and connections to both the Socialist Campaign Group and the Trade Union and Labour Party Liaison Organisation (the left love their acronyms, as demonstrated by a glossary at the front of the book). While Lansman and others were pessimistic about the prospect of getting a candidate on a ballot featuring the favourites, Yvette Cooper and Andy Burnham, Taylor had something of a revelation when recalling that Corbyn had been the only MP happy to get on the train to help a lost-cause candidate in Basildon during the general election campaign. “I thought, it’s got to be Jeremy. Jeremy’s got to win. He’s the man … I mean it was desperate stuff, but Burnham was in the City talking to business and making clear he was going down exactly the same route as New labour and Ed Miliband had done.” Lansman, crucially, was convinced.

Byron said Jeremy Corbyn … Jeremy’s got no enemies … he will get on the ballot paper … and I thought I’ve never taken Jeremy even remotely seriously. Byron was not a rabid left-winger. He was a trade union bureaucrat who had been a party bureaucrat under New Labour, and he was saying Jeremy Corbyn would get on the ballot paper, and it just made me think, actually. I mean he hasn’t got enemies. Everyone likes him, even people who thought he was a left-wing loony.

The list of important figures to whom Kogan has spoken is certainly impressive. This list also gets highlighted at the front. But from Blair and Brown to Lansman and McDonnell, it all reads rather like an “official” history, and seems sanitized accordingly. For while there is no faulting the quantity or quality of impeccably sourced meaty material on offer, the average reader would surely enjoy the sort of spice that comes only with unattributed comments. Whether a Kinnock, a Mandelson or a Miliband, one can’t help wondering what insights might have been provided under a cloak of anonymity.

What remains is an otherwise faultless account of the twists and turns undertaken by the hard left of the Labour Party to retain relevance and the hope of power while the spotlight and momentum were so often elsewhere. And perhaps what emerges above all is the negligible role Corbyn himself played in the process over the decades. Even his admirers seem more impressed by the strength of his support for the cause than the scale of his understanding of it.'

How to go from extremely likable to extremely toxic, that apparently is the story of Corbyn.

And a slightly stronger and less confused Labour Party might have prevented Brexit, but well, now we have Brexit, so we should make the best out of it. War is worse.