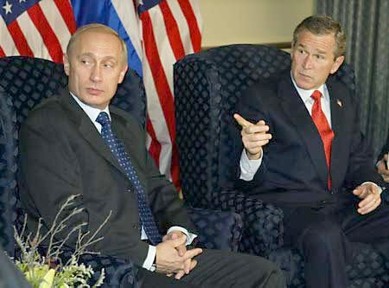 After more than two months I’m finally home again. Well, home, sort of. And Mr. Putin immediately managed to cheer me up. The International Herald Tribune reports today that Mr. Putin told the prime minister of Israel: “Say hello to your president.” As you know the president of Israel, Mr. Katsav, is suspected of harassing women.
Mr. Putin added: “He [the president of Israel] raped 10 women. I never expected it from him. He surprised all of us. We all envy him.” Let me make a modest proposal. Let’s make ten prostitutes available to all elected officials. At least half of them should be minors. And one of the minors should be a baby. Preferably unborn.
Fighting for democracy is an ugly fight, but somebody has to do it.