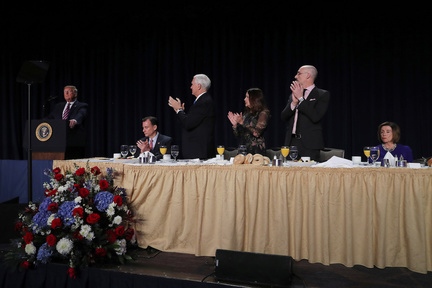 On love and faking it - Peter Baker in NYT:

'While Ms. Pelosi gave a short speech at the breakfast on behalf of the poor and persecuted, Mr. Trump seemed to glower and stared straight ahead, not looking at her. When it came time for him to speak, Mr. Trump immediately followed a keynote address by Arthur Brooks, a Harvard professor and prominent conservative thinker, who delivered a passionate plea to Americans to put aside hatred in national life and “love your enemies.”

At one point, Mr. Brooks asked the audience, “How many of you love somebody with whom you disagree politically?” Hands around the room shot up. “I’m going to round that off to 100 percent,” he said. But what he did not seem to notice was that Mr. Trump was among those who did not raise his hand.

“Contempt is ripping our country apart,” Mr. Brooks went on. “We’re like a couple on the rocks in this country.” Without mentioning Mr. Trump specifically, Mr. Brooks added: “Ask God to take political contempt from your heart. And sometimes when it’s too hard, ask God to help you fake it.”'

This is so beautiful: ask God to help you fake it. Or take some acting courses. Do something.
Loving your enemies begins and ends with acting. Fake it.
If we wait for the people to truly love their enemies we may die first.