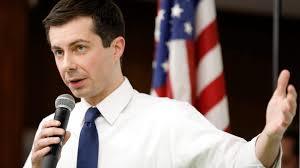 'Early in the campaign, a Slate columnist characterized Buttigieg as having “sturdy ties to straight culture”, whatever that means. Then, last July, the New Republic published, then deleted, an essay by the novelist Dale Peck which excoriated Buttigieg as “not the same kind of gay” as Peck, and by implication many other gay men. The piece was widely condemned, but it also presaged what has become a commonplace meme on political Twitter: Buttigieg as a gay Uncle Tom whose success merely reflects his servility to the status quo.'

'We tell ourselves that politics is a line from left to right, or vice-versa, but lately you’d be forgiven for wondering if it’s not, after all, a circle: in 2016 some Sanders supporters, in a grotesque echo of Donald Trump’s rallies, chanted “lock her up” at the mention of Hillary Clinton. Buttigieg, who supports reparations for descendants of enslaved people, scrapping the electoral college, and has an aggressive plan to make the US carbon neutral, is dismissed as a neoliberal barely distinguishable from the president.

For those with long memories, that kind of lazy generalization is troublesome. In 2000, people were similarly dismissive of Al Gore when he was running against George W Bush. Instead, many on the left voted for the third-party candidate Ralph Nader, who received almost 100,000 votes in Florida, helping to hand that contested state to Bush by a whisker, and with it the presidency. It’s important to hold candidates to high standards, but purity contests can backfire in unintended ways.'

Why speak about the past and Buttigieg is the past, at least for the moment, but the observation that purity contests can backfire might also explain why Sanders lost Super Tuesday instead of winning big. Too many people feared that Sanders and his supporters were all about purity contests.
It's not mainly about electability.
The status quo of the Obama years is for quite a few Americans preferable to what they perceive as a purity contest and a not so small revolution.
The left always overestimates the hunger for social and economical change.