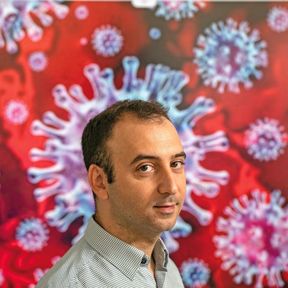 On social interactions and more - Oded Carmeli in Haaretz:

'Dr. Yamin is an engineer, not a physician. But in 2008, when he was a graduate student at Ben-Gurion University in Be’er Sheva, a certain research study caught his eye.
“It was an analysis of a dynamic model for the spread of smallpox,” Yamin, 38, says. “The researchers used tools from game theory. It was so interesting that I decided to conduct a similar study on influenza – which turned into a doctoral thesis on disease-spread models.
“If, 40 or 50 years ago, epidemiology researchers came exclusively from the field of medicine, today we understand that in order to predict the spread of diseases, it’s also necessary to understand how humans behave as a collective, to be able to analyze big data and to have the ability to create models and perform mathematical simulations – and for that you need engineers.”'

'“At Yale we worked for three weeks, with almost no sleep, to create models based on engineering tools for the spread of Ebola. The dilemma of the Liberian health ministry regarded whom to prioritize, given a serious shortage of isolation facilities. The Liberians assumed that it would make more sense to quarantine those who were ill with less serious symptoms, because the others could not be saved in any case.
“We showed that it was precisely the patients with the most acute symptoms who are the most infectious, both because of the high viral load [meaning, the amount of a virus in one’s body] and also because of the increase in the number of encounters between people: The acute patients were dying, so everyone came to take their leave from them,” Yamin says. “I was pleased that Liberia adopted our recommendations and isolated those who were seriously ill. In retrospect, we know that that new policy helped curb the epidemic.”'

The big, open question is what the chance is of dying from the virus,” Yamin explains.
“When you ask epidemiologists what the most important datum is concerning a virus, they will say it’s the rate of the basic reproductive ratio, or R0 [often called “R nought”] – the average number of people a sick person will infect. That’s an interesting question, but a theoretical one.
“The R0 of measles is 12, meaning that each person who is ill with measles infects 12 people on average. However, only 5 percent of the population can actually be infected, because most of us have been immunized or had measles in the past. So that is the upper limit of its spread.”

But we know that the R0 of the coronavirus is 2, and we still don’t know whether anyone is naturally immune to the disease.
Yamin: “The overwhelming majority of people are apparently not immune, because it’s not a common disease. After all, there is no precedent for such an infectious and violent type of virus from the corona family, so it’s safe to assume that the majority has not been exposed to the virus before this and that they can be infected. However, that’s not to say that the majority of the population will actually contract the disease.
“The basic principle is that a virus with an R0 of 2 in a non-immune population can be expected to infect 50 percent of the population. After that the R0 will reach a value of 1 or less, and the disease will be contained. By the way, it will recede in a converging exponential; in other words, the coronavirus can be expected to disappear from this region with the same dizzying speed with which it entered our lives.”

But we don’t know for certain whether a person can be infected twice.

“No, but with the majority of viruses, if you’re infected and you have recovered, you won’t be re-infected, because of immunological memory. And if you are infected again, the symptoms will be less acute the second time. The exception to the rule is influenza: Its mutation frequency is so high that you can be infected by it year after year. Last year alone, the flu underwent 17 mutations. Whereas the last time we heard about corona was 17 years ago, with SARS. In other words, the coronavirus did not undergo mutations at the same frequency as the flu. Of course, the mutations themselves are a function of the number of infections: The more infections there are, the greater the likelihood that mutations will occur. But in practice, the most rapid mutations occur in animals, and they only infect us then, and obviously it’s less probable that we will be infected again by a bat in the near future."'

'So the research is biased.

“Very biased. If I can only carry out few tests, I will test those who have the highest chance of becoming ill, and then, when I check the mortality rate among them, I will get very high numbers. But there is one country we can learn from: South Korea. South Korea has been coping with corona for a long time, more than most Western countries, and they lead in the number of tests per capita. Therefore, the official mortality rate there is 0.9 percent. But even in South Korea, not all the infected were tested – most have very mild symptoms.
“The actual number of people who are sick with the virus in South Korea is at least double what’s being reported, so the chance of dying is at least twice as low, standing at about 0.45 percent – very far from the World Health Organization’s [global mortality] figure of 3.4 percent. And that’s already a reason for cautious optimism.”'

'But German Chancellor Angela Merkel talked about a rate of infection of 70 percent in Germany.

“And Netanyahu talked about a mortality rate of between 2 percent and 4 percent. And do you know what’s most absurd? That in the final analysis [U.S. President Donald] Trump was right. Not that the coronavirus is just plain flu – it absolutely isn’t – but as he put it: ‘This is just my hunch – way under 1 percent’ [will die].’ “We must be cautious, of course, but at the moment a high probability is emerging that the risks are far lower than what the World Health Organization presented. Under two assumptions – that the health system doesn’t collapse and that life continues as usual – we are not likely to see more than 13,500 victims of the coronavirus in Israel.” (About 45,000 people die in Israel in a normal year, which would make for a rise of approximately one-third.)''

For once, Trump might have been right. But more important, Dr. Yamin sounds reasonable and knowledgeable, a mortality rate of 0,4% with 50% of a population getting sick is horrific, but as he says, "the situation is not good, but not apocalyptic." Which raises the question once again, what are justified measurements, what aren't? If we are not allowed to ask these questions anymore we might lose much more than just approximately 0,2% of a population. And needless to say, dying is not about numbers, people die. But if we want to make a serious attempt at discussing risks rationally we cannot avoid cold numbers. And we may conclude that there are bigger risks than this virus.