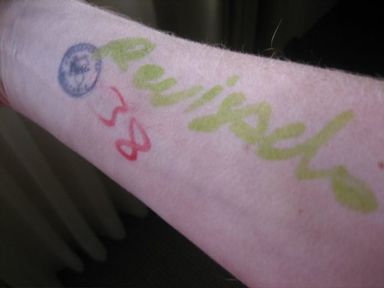 This Sunday morning I went for the second time (the first time was September 2006) to the Chorrillos prison in Lima to see some of the female MRTA prisoners.
There was no interpreter so I had to rely on a dictionary.
Last time we had vivid and sometimes hilarious discussions about the revolution and marriage.
This time the discussion was more sober.
I brought half a watermelon, six bananas, two mangos, and a box of chocolates.
I could have brought more fruit, but there are restrictions on the quantity you can bring. Some fruit, in bigger quantities, can be used to make alcohol.