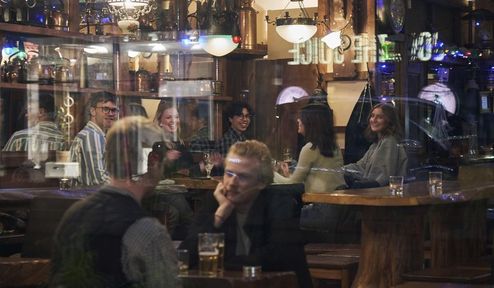 On the exception - David Stavrou in Haaretz:

'The primary schools are operating normally; gatherings of up to 50 people are still permitted; restaurants, shops, cafés and gyms remain open, although there are fewer customers. Most limitations announced by the authorities are no more than recommendations. Anyone displaying the symptoms characteristic of the coronavirus is asked to stay home, but other members of their family are not restricted from going to school or showing up for work.
Public transportation is operating, though people are encouraged to use it only when absolutely necessary, and the borders to most European countries are still open.
Welcome to Sweden, early April 2020 – a country that has adopted a radically different approach to the pandemic from both its neighbors in Scandinavia and on the European continent, and most of the rest of the world, even though the virus has already claimed quite a few victims here (477 deaths as of April 6).
It’s still too early to say whether Stockholm’s policy will turn out to be a success story or a blueprint for disaster. But, when the microbes settle, following the global crisis, Sweden may be able to constitute a kind of control group: Did other countries go too far in the restrictions they have been imposing on their populations? Was the economic catastrophe spawned globally by the crisis really unavoidable? Or will the Swedish case turn out to be an example of governmental complacency that cost human lives unnecessarily? The body in charge of managing the crisis in Sweden is the National Institute of Public Health. The agency’s 500 experts have the task of monitoring the epidemic’s development, working with the medical services and advising the government and parliament. One of its senior figures, Anders Tegnell, Sweden’s state epidemiologist, has become the country’s best-known face of the crisis, and Sweden’s singular policy has transformed him from an anonymous official into a well-known figure worldwide.'

'Indeed, initially Tegnell’s exterior appearance was the subject of many skeptical remarks. By the end of March, things had changed somewhat. Tegnell got a haircut and, like his appearance, the Swedish attitude toward the crisis also became more serious. The National Institute of Public Health developed a strategy, albeit a slightly exceptional and unusual one, the government adopted it, and Tegnell is now at the epicenter of the response to the crisis.
In a phone interview last week, Tegnell answered Haaretz’s questions about the Swedish response to the crisis.
Even given the high level of social trust and personal responsibility in Sweden, there is still the matter of the measures themselves. Don’t you think that, for example, closing schools and refraining from every form of social interaction would be a more effective way to curb the virus? Tegnell: “Possibly, if it had been possible to do that with a high level of fidelity to the laws, and for a great many months. That is not possible in Sweden.” As he says, Sweden’s goal, like that of other countries, is to “flatten the curve.” The tactics, however, are a little different. At this stage, they include two central components which are intended to slow down the infection rate. The first is to request of everyone who develops such symptoms as coughing, a sore throat and fever to stay home. The second element is safeguarding the elderly population and high-risk groups. People of 70 and up have been asked to stay home, though they’re allowed to go out for a walk if it doesn’t involve a social encounter.
Beyond that, although kindergartens and primary schools are still open, the universities and high schools have moved to online teaching, and since March 27, gatherings have been restricted to 50 people – 10 percent of the number permitted to congregate at the start of the crisis.
In another new restriction, bars and restaurants are only allowed to serve customers seated at tables (without service at the bar or at stands). In general, entertainment venues, theaters, cinemas and museums are closed. Moreover, no visits are allowed at hospitals or old-age homes (a step that was evidently taken too late, after many of these institutions have already been infected).'

'According to Tegnell, this policy is more likely to be effective than stricter bans imposed by coercive means. Asked whether he is bothered by the fact that Sweden’s elderly population will pay the price if the public does not behave responsibly, Tegnell replies that the principal question is whether rules that are forced on the population create a higher level of obedience than voluntary behavior. “We believe that what we are doing is more sustainable and effective in the long term,” he says.'

Imagine, and this is quite possible, that Mr. Tegnell and the Swedish government are right - we will know this in six to twelve months, maybe even earlier - then we should ask ourselves: are the Swedish people fundamentally different from other peoples? Psychologically this hypothesis is rather bizarre, nationalism and national identity are mainly built on myths.
So maybe we should ask the question differently: why did other governments decide to shut down almost everything?

Unfortunately, the fight against this virus goes hand in hand with this other fight: the attempt to quell dissent.