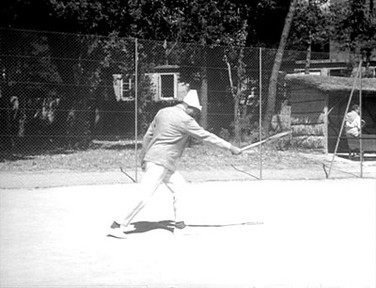 On Jacques Tati, modernist design and some terror – Geoffrey O’Brien in Harper’s:

‘Yet he would not be much remembered if he had not, during the same period, tried his hand as a movie actor. It was on film that the artistry apparent to Colette would find its full and singularly original expression. In the six features he made between 1949 and 1974—Jour de fête, Monsieur Hulot’s Holiday, Mon Oncle, PlayTime, Trafic, and Parade—he constructed a world apart, with its own forms, language, and humor, a humor as mysterious as it is funny. Unlike those of the silent comedies he adored, his gags don’t build toward climactic guffaws. Instead they pop up unexpectedly, as when two men, each carrying a furled umbrella strapped to a piece of luggage, rush past each other to board a bus at opposite ends. As their paths cross, the handles latch together and the umbrellas are left neatly linked on the pavement, while their owners continue on their way unaware. The trick takes a fraction of a second and has no connection to anything else that happens.
Tati’s first three features were received in their day as effervescent entertainments, and the unfailingly polite, blissfully oblivious M. Hulot—the out-of-sync onlooker with his pipe, closed umbrella, striped socks, and wrinkled raincoat—became an international comic icon. Tati picked up an Oscar for Mon Oncle, in which Hulot wandered in sweet-natured confusion amid a new world of ostentatious gadgetry and garish, eye-popping modernism. Fending off Hollywood offers, Tati enjoyed a happy combination of commercial success and critical admiration. However, his ambitious follow-up—the 70-mm PlayTime, for whose set he built something like a city (journalists called it “Tativille”) on the outskirts of Paris—proved a failure so devastating that he lost most of his personal assets, including the rights to his films. His last two productions were low-budget and not widely seen on release but continue to find devotees. In failing health, he was unable to realize his final screenplay, Confusion, in which he was determined to kill off Hulot and depict a video-dominated future without windows, where people communicate solely by screen.’ (…)

‘A suitable monument to Tati’s lifework can be found in Taschen’s five-volume set of books The Definitive Jacques Tati, a superabundant compendium, edited by Alison Castle, that is almost heavy enough to require a forklift. Taschen provides all the supplementation to the films that one might ever need; the films themselves can be conveniently explored in full in the Criterion Collection’s splendid seven-disc box set The Complete Jacques Tati. The Taschen set incorporates Tati’s writings and interviews; the screenplays for each of his films (including two that were never made); hundreds of stills, production photos, drawings, and blueprints; illuminating essays on various formal aspects of his work; and a detailed chronology of his life.
The stills alone—in a separate, wordless volume allowing the arc of each film to be revisited through carefully chosen images—make a powerful case for him as visual inventor. The essays establish the equal importance of his radical experiments in sound and his treatment of dialogue—or, more precisely, his transmutation of dialogue into a multilingual, semi-comprehensible musique concrète. Tati shot all his films silent, then typically spent as much time on the post-synced soundtrack as on the cinematography, although Tati’s notion of synchronization is not like anyone else’s. In nearly abstract soundscapes, every aural texture is deliberately placed, often in a way calculated to mislead and surprise. The young girl’s footsteps represented by the sound of Ping-Pong balls in Mon Oncle is one example out of a thousand.
The level of detail throughout Taschen’s set is staggering—appropriate for a filmmaker who considered no component minor. Tati conducted some six hundred auditions for the relatively small cast of Mon Oncle, collected recordings of 365 different samples of ocean waves for the beach scenes of Monsieur Hulot’s Holiday, and by his own account personally mimed each extra’s movements for the crowded ensemble scenes of PlayTime. The screenwriter Jean-Claude Carrière once described Tati at work in a recording studio: Carrière watched “with astonishment as he broke glasses, one after the other, for hours, with utmost seriousness, in order to obtain the best possible sound.” The long list of sound sources for Mon Oncle provided here includes “a double bass, a large rusty hinge, and an over-inflated beach ball.” The finishing touch is a three-page inventory, in what looks like six-point type, of every motor vehicle appearing in a Tati film—from the 1914 Unic M1 pickup in the 1935 short Gai dimanche to the 1976 Volkswagen Scirocco coupe in the unfinished documentary Forza Bastia—along with an illustrated essay exploring the countless comic devices Tati extracted from cars and roadways. (A supreme example of this is the multicar pileup in Trafic,choreographed like a mechanical ballet and culminating not in disaster but in what looks like the idyllic liberation of the drivers from their vehicles.) This may sound like pedantry, but for anyone who has waded into Tati’s work it makes perfect sense. He himself couldn’t refrain from revisiting his films to tighten their editing, add or delete scenes, tweak the music or the color. Likewise, for a viewer who develops a taste for Tati, his films become not so much spectacles to watch as places to revisit, offering different sights and sounds each time.’

‘Gregarious as he was, Tati also had the self-protective wariness of the autodidact, and perhaps also of the son enduring his father’s disapproving gaze as he walked away from the family business to become, as his father put it, “a clown.” As much as he savored the collective warmth of shared laughter, it’s the tincture of solitariness that gives his films their edge. The way he mutes and diffuses the speech of his characters feels like the expression of someone hovering at the edge of other people’s conversations, connecting with them only in sporadic fragments, as if across an invisible barrier. As his closest collaborator, Jacques Lagrange (the painter Tati credited as his “artistic adviser”), summed it up: “He was shy . . . He could never express himself. It was the story of his life. That’s why he was a mime!”’

‘Tati can hardly be against modernist design, whether of automobiles or homes or glass-walled office buildings, considering what stunning use he makes of it in every shot. It’s only what becomes of human life within those spaces that is terrifying to contemplate: except that terror, with Tati, translates instantly into comedy.
Finally, he brings all his characters to the luxurious, newly opened Royal Garden restaurant. As it happens, the restaurant isn’t quite finished yet: the workmen are still hammering away at crucial fittings, the management is getting edgy, the staff isn’t up to speed, and the architecture itself turns out to have major design flaws. Small quarrels and rebellions break out. As the guests begin to stream in, a slow process of dissolution has already begun. One of Tati’s early routines was “the clumsy waiter,” an act he would perform in restaurants for unwitting customers. The Royal Garden sequence expands that notion of decorum disturbed to a level of chaos that has its own kind of stateliness. The world falls apart slowly and grandly, and amid the wreckage a different one emerges as a free-spending American tourist whips up a drunken song-filled party. It is a sequence that suspends time. You hardly notice that half the film has gone by. When dawn comes, it feels as if the spectator too has been up all night.’ (…)

‘At the renovated LaGuardia Airport (still, like the Royal Garden, very much under construction), as I grope my way among newly instituted systems of ordering and paying for and picking up a cup of coffee, weaving past posters of the Airport of the Future that does not quite exist yet and racks of self-help books with titles like How to Be a Persuasive Manager, I begin unavoidably to feel as if possessed by the diffident ghost of M. Hulot.’

‘Les vacances de Monsieur Hulot’ made a huge impression on me when I saw it as a child – my father was a big Tati fan – and it remains my favorite Tati movie.
All that can be said about mass tourism has been said in that movie, and later criticism has been merely concealed snobbery.

Tati was a connoisseur of the man in the crowd, without giving the audience the feeling that he was above him. The beauty of Monsieur Hulot is that he is trying hard to fit in. He might be an onlooker, but not out of arrogance, he is waiting for an invitation.