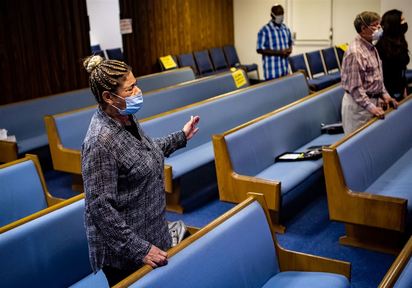 Once again about aerosols - Linsey C. Marr in NYT:

‘I am a civil and environmental engineer who studies how viruses and bacteria spread through the air — as well as one of the 239 scientists who signed an open letter in late June pressing the W.H.O. to consider the risk of airborne transmission more seriously.
A month later, I believe that the transmission of SARS-CoV-2 via aerosols matters much more than has been officially acknowledged to date.
In a peer-reviewed study published in Nature on Wednesday, researchers at the University of Nebraska Medical Center found that aerosols collected in the hospital rooms of Covid-19 patients contained the coronavirus.
This confirms the results of a study from late May (not peer-reviewed) in which Covid-19 patients were found to release SARS-CoV-2 simply by exhaling — without coughing or even talking. The authors of that study said the finding implied that airborne transmission “plays a major role” in spreading the virus.
Accepting these conclusions wouldn’t much change what is currently being recommended as best behavior. The strongest protection against SARS-CoV-2, whether the virus is mostly contained in droplets or in aerosols, essentially remains the same: Keep your distance and wear masks.
Rather, the recent findings are an important reminder to also be vigilant about opening windows and improving airflow indoors. And they are further evidence that the quality of masks and their fit matter, too.
The W.H.O. defines as a “droplet” a particle larger than 5 micronsand has said that droplets don’t travel farther than one meter.
In fact, there is no neat and no meaningful cutoff point — at 5 microns or any other size — between droplets and aerosols: All are tiny specks of liquid, their size ranging along a spectrum that goes from very small to really microscopic.
(I am working with medical historians to track down the scientific basis for the W.H.O.’s definition, and we have not found a sensible explanation yet.)’

‘So what does this all mean exactly, practically? Can you walk into an empty room and contract the virus if an infected person, now gone, was there before you? Perhaps, but probably only if the room is small and stuffy.
Can the virus waft up and down buildings via air ducts or pipes? Maybe, though that hasn’t been established.
More likely, the research suggests, aerosols matter in extremely mundane scenarios.
Consider the case of a restaurant in Guangzhou, southern China, at the beginning of the year, in which one diner infected with SARS-CoV-2 at one table spread the virus to a total of nine people seated at their table and two other tables.
Yuguo Li, a professor of engineering at the University of Hong Kong, and colleagues analyzed video footage from the restaurant and in a preprint (not peer reviewed) published in April found no evidence of close contact between the diners.
Droplets can’t account for transmission in this case, at least not among the people at the tables other than the infected person’s: The droplets would have fallen to the floor before reaching those tables.
But the three tables were in a poorly ventilated section of the restaurant, and an air conditioning unit pushed air across them. Notably, too, no staff member and none of the other diners in the restaurant — including at two tables just beyond the air conditioner’s airstream — became infected.
Similarly, just one person is thought to have infected 52 of the other 60 people at a choir rehearsal in Skagit County, Wash., in March.
Several colleagues at various universities and I analyzed that event and in a preprint (not peer-reviewed) published last monthconcluded that aerosols likely were the dominant means of transmission.
Attendees had used hand sanitizer and avoided hugs and handshakes, limiting the potential for infection through direct contact or droplets. On the other hand, the room was poorly ventilated, the rehearsal lasted a long time (2.5 hours) and singing is known to produce aerosols and facilitate the spread of diseases like tuberculosis.’

‘Some scientists have argued that just because aerosols can contain SARS-CoV-2 does not in itself prove that they can cause an infection and that if SARS-CoV-2 were primarily spread by aerosols, there would be more evidence of long-range transmission.
I agree that long-range transmission by aerosols probably is not significant, but I believe that, taken together, much of the evidence gathered to date suggests that close-range transmission by aerosols is significant — possibly very significant, and certainly more significant than direct droplet spray.
The practical implications are plain: • Social distancing really is important. It keeps us out of the most concentrated parts of other people’s respiratory plumes. So stay away from one another by one or two meters at least — though farther is safer.
• Wear a mask. Masks help block aerosols released by the wearer. Scientific evidence is also building that masks protect the wearer from breathing in aerosols around them.
When it comes to masks, size does matter.
The gold standard is a N95 or a KN95 respirator, which, if properly fitted, filters out and prevents the wearer from breathing in at least 95 percent of small aerosols.’

No singing in public, which in many cases is not necessarily a huge loss, the N95 and KN95 mask are “the gold standard” and no stuffy and small rooms.

And I expect New Yorkers and other urbanites to dine al fresco all year long,

The après-ski experience is coming to the Big Apple.