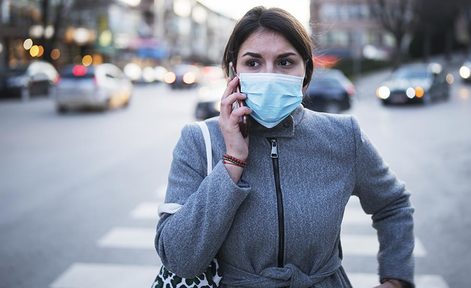 ‘Here's one for you!’ a friend wrote and sent me this article by Christopher Caldwell on Giorgio Agamben and the virus in NYT:

‘The arguments for freedom may be strong — but they are put awfully crudely. The arguments for discipline and prevention may often be resented — but they have a lot of scientific authority behind them, and they carry the day. Better safe than sorry. Late last month, Italy’s parliament voted to extend the government’s state of emergency until Oct. 15.
In a society that respects science, expertise confers power. That has good results, but it brings a terrible problem: Illegitimate political power can be disguised as expertise. This was a favorite idea of the French philosopher Michel Foucault, who used it to explain how experts had expanded definitions of criminality and sexual deviancy. One of Italy’s most celebrated thinkers, Giorgio Agamben, has recently applied similar insights to the coronavirus, at the risk of turning himself into a national pariah.
In late February, Mr. Agamben began using the website of his publisher, Quodlibet, to criticize the “techno-medical despotism” that the Italian government was putting in place through quarantines and closings. Mr. Agamben, 78, is a philosopher of language, art and meaning. Since 1995, he has focused on what he calls the “archaeology” of Western political institutions, devoting a monumental nine-volume work, “Homo Sacer,” to excavating their hidden logic. Some of his earlier work was translated by Michael Hardt, the Duke professor and co-author of the radical campus classic “Empire.”’

‘Last month, Quodlibet published Mr. Agamben’s collected posts in an expanded volume called “Where Are We Now? The Epidemic as Politics.” (That’s a rough translation; the book does not yet exist in English.) In hindsight, Mr. Agamben missed a few things in the first days of the coronavirus. For instance, he relayed the National Research Council’s description of Covid-19 as a kind of influenza — true enough in most cases, but far from the whole story. Today, however, with the Italian crisis receding, and with a measure of calm restored to the public discussion, we can see his book for what it is: not a work of scientific crankery or crackpot policymaking but an on-the-spot study of the link between power and knowledge.’

‘Mr. Agamben’s name may ring a bell for some Americans. He was the professor who in 2004, at the height of the “war on terror,” was so alarmed by the new U.S. fingerprinting requirements for foreign visitors that he gave up a post at New York University rather than submit to them. He warned that such data collection was only passing itself off as an emergency measure; it would inevitably become a normal part of peacetime life.
His argument about the coronavirus runs along similar lines: The emergency declared by public-health experts replaces the discredited narrative of “national security experts” as a pretext for withdrawing rights and privacy from citizens. “Biosecurity” now serves as a reason for governments to rule in terms of “worst-case scenarios.” This means there is no level of cases or deaths below which locking down an entire nation of 60 million becomes unreasonable. Many European governments, including Italy’s, have developed national contact tracing apps that allow them to track their citizens using cellphones.’

‘His point is that social distancing is at least as much a political measure as a public health one, realized so easily because it has been pushed for by powerful forces. Some are straightforward vested interests. Mr. Agamben notes (without naming him) that the former Vodafone chief executive Vittorio Colao, an evangelist for the digitized economy, was put in charge of Italy’s initial transition out of lockdown. Social distancing, Mr. Agamben believes, has also provided Italy’s politicians with a way of hindering spontaneous political organization and stifling the robust intellectual dissent that universities foster.
The politics of the pandemic expose a deeper ethical, social and even metaphysical erosion. Mr. Agamben cites Italians’ most beloved 19th-century novel, Alessandro Manzoni’s “The Betrothed,” which describes how human relations degenerated in Milan during the plague of 1630. People came to see their neighbors not as fellow human beings but as spreaders of pestilence. As panic set in, authorities executed those suspected of daubing houses with plague germs.
When a society loses its collective cool this way, the cost can be high. Rich, atomized, diverse, our society has a weak spot, and the coronavirus has found it. “For fear of getting sick,” Mr. Agamben writes, “Italians are ready to sacrifice practically everything — their normal living conditions, their social relations, their jobs, right down to their friendships, their loves, their religious and political convictions.”’

This not new, people are willing to sacrifice almost everything for perceived or real safety.
During the first days of the lockdown (in the Netherlands) I wrote about this in the the Dutch newspaper NRC Handelsblad. You can read it here. (Unfortunately, only in Dutch.)

Since then the resistance against governmental overreach has come mainly from right-wing lunatics. And fair enough, as Caldwell points out, some people see in Agamben a lunatic.
Also, Caldwell and Agamben appear to underestimate a moderate anarchism that is prevalent in all societies, in some more than others.
Rules are rules, but many people will move with some agility around them. I’m mainly in favor of this. Rules need to be bent, this can be overdone of course, but it’s healthy that citizens feel the freedom to do this.
As to face masks. A fairly large collection of anecdotal evidence tells me that most New Yorkers wear face masks outside. Some of them use them only to cover their mouth or their chin, as yours truly often does, but most citizens follow the urgent advices of the local governments and cover nose and mouth on the streets.
The last word about the positive effects of these face masks has not been spoken.
But the negative side effects are I would say non-existent.
So why not? The security measures taken after 9/11 are more dangerous, these measures were trampling on the rights of ordinary citizens, much more so than most of the government responses to Covid. Think of Gitmo, no-fly-list et cetera.

Yes, it’s dangerous when the government comes knocking on your door to see if you are in self-quarantine or not. More than dangerous, that’s one way liberal democracy will end.

But I don’t think this is happening anytime soon. Even Trump, our own anti-Christ, is against it.

I’m in favor of the Swedish model, but overall the European governments behaved fairly reasonably, based on what they could do, and what a majority of citizens expected them do.
Yes, the French overdid it a bit, but the belief that God lives in Paris, speaks French and works for the French government is part of the French identity and this has certain consequences.

The English had no clue, but what’s new after Brexit?

And thank God, there was Merkel and some more or less responsible people at the EU in Brussels.

(The situation in Latin America is fairly different.)

Because the opposite of limited anarchy is totalitarianism.