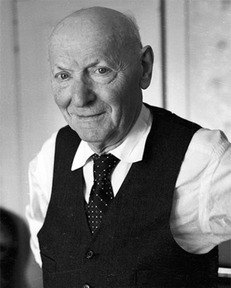 In her Isaac Bashevis Singer biography Jannet Hadda quotes him: “Although we were still close to Warsaw and the train ran past little depots of familiar towns, I felt as if I were already abroad. I knew that I would never come this way again and that Warsaw, Poland, the Writers’ Club, my mother, my brother Moishe, and the women who were near to me had all passed over in the sphere of memory. The fact is that they had been ghosts even while I was still with them.”

Singer liked to mythologize his own life – fair enough, only mediocre authors don’t do this and mythologizing your own life is not a guarantee against not being mediocre, but at least in that case you can become a decent con man – but even if you keep that in mind it remains an extraordinary statement. Speaking of detachment.

Only his older brother and writer as well, Israel Joshua, appeared to be more than a ghost to him.
Isaac Bashevis Singer combined childishness, in the best sense of the word, and utter recklessness. I’m not sure if you need this to be a good author, that would be absurd, but it seems to me that a certain amount of innocent recklessness is the essence of what is nowadays called “the creative process”.