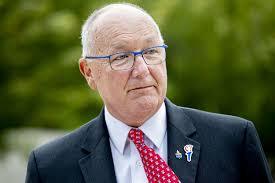 On the Netherlands – Steven Erlanger in NYT:

‘The ambassador, Pete Hoekstra — whose 2017 appointment to the role drew criticism over his earlier remarks that the Netherlands had “no-go zones” of Muslim-ruled enclaves — hosted a party at the embassy on Sept. 10 along with the Forum for Democracy Party, a group that is euroskeptic, identitarian and highly critical of the impact of Islam on European and Dutch society.
A native of the Netherlands, Mr. Hoekstra, 66, has both amused and annoyed many in the country with comments that align with the views of the Forum for Democracy. A conservative former Republican congressman from Michigan who helped found the Tea Party caucus, he was appointed ambassador to the Netherlands by President Trump.
To host a political fund-raiser would, on its face, be interference in domestic politics and a violation of the 1961 Vienna Convention on Diplomatic Relations.

In emailed comments Wednesday afternoon, the State Department said that “this was not a fundraiser’’ but a “town hall discussion” with Mr. Baudet’s party, an example of Mr. Hoekstra’s “substantive engagement with a range of Dutch political parties.’’'

‘Mr. Baudet favors the Netherlands exiting the European Union and adding limits on immigration. He has also been highly critical of the influence of Islam, though unlike Mr. Wilders, he says he does not wish to ban the Quran.’

It’s fair to say that unlike the Brexiteers, who just wanted to get the UK out of the EU without a plan afterwards, Mr. Baudet is keen on destroying the EU, without having a plan afterwards.
This is something he has in common with the current administration in DC and Putin, to name just a few.

Interestingly, in the polls Baudet’s party is lagging far behind the other extreme-rightwing party of Mr. Wilders. Just eighteen months ago the polls had Baudet in first place.

Mr. Baudet might be more palatable to the bourgeoisie, but especially compared to Mr. Wilders he comes across as a complete phony, to use one of Mr. Salinger’s favorite words.

Mr. Baudet appears to be destroyed by media training, by his own vanity or by a combination of both.