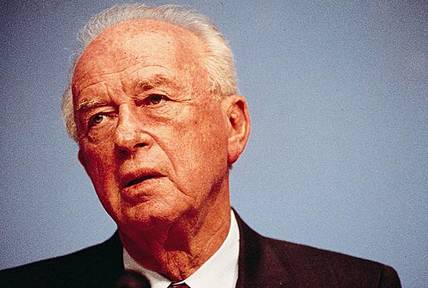 On ideological purity and single-issue movements – Anshel Pfeffer in Haaretz:

‘Politicians are nearly always pragmatic creatures. When Yitzhak Rabin decided to recognize the Palestinian national movement and sign the Oslo Accords with its leaders, it wasn’t a sudden rebirth of the old general as a peacenik. He had made a clearheaded assessment that Israel was secure and strong enough to relinquish control over most of the West Bank and the Gaza Strip.
That pragmatism doesn’t make him and the fact that he was murdered in his quest to secure peace for Israel less worthy of commemoration. There’s no need to mythologize Rabin to appreciate the historical importance of what he did.
Likewise, when Congresswoman Alexandria Ocasio-Cortez decided to cancel her appearance at a memorial for Rabinorganized by Americans for Peace Now, it wasn’t because she or her staff suddenly recognized a different version of Rabin’s legacy, one presented to them by left-wing Jewish activists on behalf of the Palestinian people.’

‘The Jewish left in the Diaspora, especially in the United States and the United Kingdom, is repeating the same mistake of the Israeli left (which sets an unusual precedent, since usually the left wing in the Diaspora is the one ahead of the curve). That mistake is to focus their activism more and more on one issue, making it their litmus test for ideological purity.
This is a bad mistake for a number of reasons.
First of all, single-issue movements are rarely a good idea. They run a big risk of making themselves irrelevant if the issue, no matter how important or justified they may think it, is of little interest to others.
I’m not arguing for a moment that ending Israel’s control over the lives of millions of Palestinians isn’t a critical mission. But like it or not, it isn’t high on anyone’s agenda right now, and is unlikely to be for the foreseeable future. That doesn’t mean forsaking the issue. It does mean being smart and strategic about how to continue pursuing it.
Thinking strategically means finding allies within the community you’re hoping to influence. So what allies have those who fought against the Rabin event gained? They’ve lost the possible alliance with “liberal Zionist” groups like APN and they certainly haven’t won over AOC – after this, she’ll run a mile away from any event concerning Israel-Palestine, and quite rightly, from her perspective. Why risk alienating potential supporters on either side?’

‘It wasn’t always like this. Rabin’s second government didn’t only include the Labor party, then under his leadership. It also embraced Meretz, then a new party formed out of three: Ratz, which championed civil rights for all, including Palestinians; socialist Zionist Mapam; and Shinui, which focused on the fight against religious coercion.
Meretz’s first leader, Shulamit Aloni, was also the last leader of the Israeli left who could be regarded as a serious standard-bearer for all these causes. She also understood that for the left to have any real influence, it had to compromise and sit in coalitions with centrist parties like Labor. Meretz won an unprecedented 12 Knesset seats in its debut election in 1992. Though their role is often overlooked, Rabin wouldn’t have come to power or made his historic decision to engage with the PLO without Meretz in his government.
The Israeli left was relevant then. It isn’t now.
That’s mainly because from the mid-1990s onward, the left channeled nearly all its energies into one issue. Then, when Israelis’ hopes for a historic compromise with the Palestinians was derailed by the second intifada, the left failed to come up with compelling reasons why Israel should continue to seek peace with the Palestinians – but it had no policies on the other issues.
Just when Israel needed it to confront some of the worst tendencies of the right of Prime Minister Benjamin Netanyahu – the cronyism, the hypercapitalism, the slow erosion of democracy and civil rights and the surrender to religious special interest groups – the left chose to go down a rabbit hole.’

Striving for ideological purity leads to infighting, irrelevance and marginalization,

More or less the same can be said about one-issue-movements, although those movements nowadays tend to champion the idea of ghettoization.
The desire for moral or other kinds of purity ends in fascisms, symbolic witch hunts or indeed utter irrelevance.

And there the religious zeal kicks in. If you want to start a religion you must be convinced that you are right, you must be irrelevant and yet have this burning desire to be relevant.
The most plausible outcome is that you end up on a compound with 200 followers or so and hopefully no weapons.