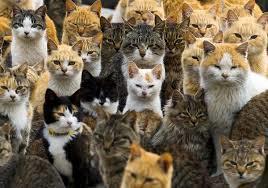 On cats – Ian Ground in TLS:

‘John Gray opens his latest book by mocking a philosopher for attempting to keep his cat on a meat-free diet. Other philosophers have claimed that the natural world would be much improved if it contained only herbivores. For Gray, such ambitions are emblematic of human hubris, whose sources and consequences he has spent a career teasing out of our intellectual history. If his previous works have struck some as fulminating and misanthropic, this latest volume is gentler and a tad more constructive. Gray’s object is to teach “how to lighten the load that comes with being human” by learning from the cat. There is a pleasing wit in the conception: pouncing from the author’s Straw Dogs to land all fours on the crisis of confidence in the liberal consensus, the fashion for mindfulness and, of course, the reason for which human beings invented the internet: our obsession with cats.’

‘Still, the experience is brusquely entertaining. Gray offers well-timed scratches at tender bits of the human psyche and sinks some sharp teeth into a few of our most cherished self-conceptions – in particular, our conceptions of ourselves as rational, ethical, transcendent over nature. Yet for someone so grimly opposed to hubristic narratives and metaphysical fictions, Gray appears to be rather too given to them himself. His diagnosis of our ills, individually and as a species, trades heavily on the traditional distinction – one enshrined in the mirror-recognition test beloved of animal sciences – between the merely conscious non-human and the fully self-conscious human.’

‘With that more traditional turn comes a familiar lapsarian story, this time with a Buddhist twist. With self-consciousness – the original sin – comes awareness with its attendant anxieties of mortality and finitude. It is “reflexive self-consciousness that engenders the special wretchedness of the human animal”. It divides us against ourselves and against the world. To assuage those anxieties we seek happiness and, through religion or philosophy, meaning. We harbour ambitions about escaping our own nature, dreaming fitfully of moral perfection, of individual immortality or scientific omniscience. But these recourses are, by Gray’s lights, fantasies. We are advised to embrace anti-philosophies that remind us of our finitude, and ethical perspectives that make us as comfortable as we can be with being as uncomfortable as we must be. Even so, as a sceptic about reason, Gray thinks that we cannot be argued out of our fantasies. Instead, reflection on the lives of the beings who stand in contrast to us provides the necessary therapy. Cats, pre-eminently, teach us the noble truths we need.
Some of what Gray wants to say here could be said about any non-human animal. Lacking self- consciousness, non-human animals are present in the world more completely than we are. They inhabit nature fully whereas we are always dislocated, at a right angle, from it. Indeed, we are destroying it. It is tempting, seeing the documentary about blue whales cruising through the very oceans that we are poisoning, to think: “Would the world not be a better place without us?” The temptation rarely survives a glance at our children.’

‘Gray sees the domestic cat as a Buddhist ideal: serenity achieved through an absolute fidelity to one’s nature. “Life as the cat they happen to be is meaning enough for them”, he writes. “Humans, on the other hand, cannot help looking for meaning beyond their lives.” This thought might indeed do one some good, as one sits worrying about people, politics and pandemic, idly tickling a feline ear. But one wonders if it is built on an equivocation. If, as Gray laments, we are meaning-hungry creatures but cats don’t need this kind of meaning in their lives, the question of whether they have meaning from their mere being in the world simply should not arise. We might wonder too, if we are to be true to our natures, whether that should include embracing our anxiety-ridden, divided condition.’

‘The lessons that Gray wants us to learn from the cat, as well as from other kinds of creature in all their multiplicity, are available in part because we remain blind to the internal dynamics of their lives. The endeavour to make that weft tangible in the case of cats and other species is not a philosophical absurdity but a matter of arduous and painstaking empirical work. It is only in the past sixty years or so that ethologists have begun to show us the kind of complex interactions and associated perceptual, cognitive and affective economies that structure the lives of the creatures with whom we share the world. It would be hubris indeed to think that we can already know what philosophical lessons we should learn.’

Yes, we are meaning-hungry creatures, this hunger might be unpleasant, but the solution is not to get rid of all meaning.

Maybe we should accept that meaning can be many things. How much meaning do you need today?

Well, it differs, some people need a lot of meaning.

Let’s say, the sane have an inkling of how irrational they are.