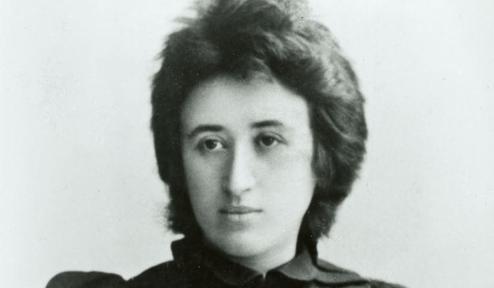 On Rosa Luxemburg – Susan Watkins (19 years ago) in LRB:

“In the feverish atmosphere that gripped Europe after the Russian Revolution, there were many who saw insurrection as a gateway to the future: 1919 brought revolutionary uprisings in Budapest, Munich and Berlin. In Germany, the newly installed Social Democratic Government bloodied its hands suppressing the revolts. Since the regular troops could not be relied on, the SPD Defence Minister Gustav Noske gave the notorious Freikorps – forebears of Hitler’s Einsatzgruppen – carte blanche to act against the insurgent crowds. During the weeks of terror that followed, two of the revolutionary leaders, Rosa Luxemburg and Karl Liebknecht, went into hiding in Berlin. Betrayed, they were arrested on 15 January 1919, taken to the Freikorps divisional headquarters at the Hotel Eden, interrogated and beaten. Luxemburg was thrown, dead or dying, into the Landwehr canal where, months later, her body was found floating; on Noske’s orders, it was hurriedly transported to a military base outside Berlin. The woman who talked her way past the grey-coated guards to identify the body – from a scrap of velvet dress, a golden clasp and a ‘pair of gloves which I had bought’ – and who determinedly drove away with the coffin, ensuring Luxemburg the full honours of the public funeral the Government had been so anxious to avoid, was Mathilde Jacob.”

“Various unfinished drafts went off in the suitcases of friends and colleagues fleeing Germany in the late 1930s; in 1939 she entrusted the earliest manuscript – liveliest and most immediate of all, although perhaps, to her anxious eyes, lacking in historical weight – to Ralph Lutz, to deposit at the Hoover Institute at Stanford. (Her own increasingly desperate applications to US Immigration met with no success and in 1942 she, too, was rounded up by grey-coated soldiers; she died at Theresienstadt on 14 April 1943.) First published in Germany in 1988, under Jacob’s original title, Rosa Luxemburg and her Friends, in War and Revolution 1914-19, this urgent little book is compiled mainly from later drafts, with excerpted material from the first version bracketed in the text. It turns out to be a love story, as one might have guessed.
Jacob was born in Berlin in 1873, a Jewish butcher’s daughter, the eldest of eight. Socially and politically fearful, she grew up in rough streets, alert to ‘the pogrom mood’. In photographs she is watchful and anxious, a guarded glance at the camera from a sensitive, fleshy face. A conscientious student – she had to leave the sixth form when her father went bankrupt, and later supported her widowed mother and younger sisters as a stenographer, running a typing and duplicating service from their flat. Luxemburg first came banging on the door in January 1914; and here the memoir begins.”

“Luxemburg springs from these pages in her own words – in the prison letters, quoted here at length, and in the histrionic prose of the anti-war leaflets that Jacob smuggled out from her cell – rather than in her friend’s descriptions. But Jacob’s account of the Spartakus opposition makes a useful corrective to a story often told in triumphalist terms. She stresses instead the apparent ‘hopelessness’ of the time, the seemingly unending war, the merciless state machine that turned against anyone who resisted, threatening penal servitude if evidence could be produced against them, or the trenches if it could not. By 1917, she writes, many were too frightened to continue the campaign against the war, while ‘many others withdrew, tired of fighting, because everything seemed so useless,’ or because they could no longer cope with the strain. Jacob’s role pitted her against state bureaucracy: any tiny thing she might bring the prisoner – pencils, biscuits, socks – required a judge’s permission, and she spent hours in cold waiting rooms and polished corridors, wangling permits and filling out forms. Luxemburg herself could be difficult on prison visits, temperamental or paranoid by turn, ill from the isolation and stress. She was plagued by dreams in which she found herself having to take a stand on her own: I dreamt I was to sing a song and play my own accompaniment on the piano, at a concert ... Suddenly, at seven o’clock in the evening, I realise that I can’t play the piano. Who will accompany me? I must quickly fetch my niece. Then I remember that my niece does not play the piano but the violin – and in horror, I wake up.
When Jacob came to see her, Luxemburg would climb onto her lap and bury her face in her shoulder to cry – ‘intimacies she would never normally have allowed’; or refuse to see her at all if she suspected Jacob had made some concession to a prison supervisor she loathed.”

“Where it ends: paradoxically, the most intimate portrait in Jacob’s memoir is that of Luxemburg’s éminence grise and former lover, Leo Jogiches. Tall and domineering, with dark blond hair and (according to Luxemburg) golden eyes, Jogiches took control of the underground opposition network in 1916, after Liebknecht’s arrest. He came to Jacob’s flat every night to dictate the anti-war bulletins that made their way through a web of clandestine distributors to the factories, the railways and the Front; and her account of him is written with warmth, directness and understanding. Proud and ultra-secretive, with much of his political career still shrouded in mystery, Jogiches has had the misfortune to become known to the world largely through the letters of his ex-mistress (sadly, his letters are lost). Lovers since their student days, they had a 16-year affair which ended in 1907 in a painful and protracted break – death threats the least of it – with Luxemburg accusing him of being cold and dictatorial, of squandering his life, manipulating others, and being incapable of a single generous act (he would never let her give him a baby).
Most striking in Jacob’s account is Jogiches’s patience and tenderness. His responsibilities were phenomenal: shouldering the tasks of those in prison, he took charge of the entire underground anti-war network, as well as determining the political direction of the Spartakus League, yet Jacob remarks on how calmly he used to work. After three or four hours’ dictation he would break off, stretch his arms and relax by telling silly stories about the old days – tales that end with Luxemburg having to sit down on the pavement because she is laughing so much. Then again, speaking of her ‘extraordinary kindness’, he remembered how, as a student in Zurich, he had complained to Luxemburg about not having any tea to drink – his addiction. ‘Take this,’ she had said at once, handing him a packet that her parents had just sent from Warsaw. Nearly thirty years later, he was still wondering at this – ‘Naturally,’ he quickly adds, ‘I didn’t take it.’ This, Jacob suggests, was the real story of their relationship: ‘It was always impossible to get him to accept anything.’ Trained from his youth in tsarist Vilna in the disciplines of clandestinity, Jogiches clearly felt safe enough with Jacob to think aloud with her. He was doubtful about the strategy of splitting the SPD to found the German Communist Party (KPD), critical of what Jacob calls ‘the putschist tendency’ – he and Luxemburg inserted a clause in the infant KPD’s programme declaring that it would never attempt to take power without the majority support of the German working class – and highly sceptical, later, of Liebknecht’s tactics in the uprising of 1919. Almost the last words Jacob records him saying come from the period of strikes and street fighting some months after Luxemburg’s murder, just before he himself was beaten to death – in some accounts, shot in the back – in a police cell: ‘When all this is over, I might go to Scandinavia. It’s the only place I liked that I’ve been to without Rosa. Anywhere else, I would miss her too much.’”

“Luxemburg’s worries about the Berlin uprising are well known (‘But what about our programme, Karl?’): they are not Jacob’s. Arrested for the last time, Luxemburg was not expecting to die – perhaps she did not quite realise that the Bolshevik Revolution had changed everything. All the same, defiance was her choice. ‘Sun, peace and liberty,’ she had exulted on her release from prison in 1906, ‘the finest things in life – apart from sun, storm and liberty.’ ‘And in the end,’ she wrote in her last letter to Zetkin, ‘we have to take history as it comes.’”

And another interesting remark by a revolutionary and a very brave and intelligent woman, who has been slightly abused by many of her admirers after her death who tried to turn her into this one-dimensional saint: we have to take history as it comes.

History has no will, neither a purpose, is the result mainly of chaos, coincidence, power struggles, human weaknesses and desires, and forces and passions that cannot easily be explained.
But yes, even the revolutionaries should not believe that they can bend history to their will.

Not only democracy is impossible without a certain amount of fatalism, life itself requires a healthy dose of it, no overdose, a healthy dose.