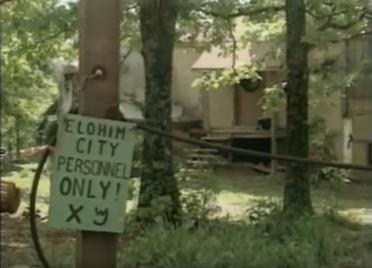 On lone wolfs and Elohim City – Laura Smith in NYT:

‘Louis Beam’s tract “Leaderless Resistance” had originally been printed in samizdat editions in the early 1980s, but in February 1992 he put the text on the internet, and its reach increased exponentially.
In the 3,400-word essay, Mr. Beam channeled a guerrilla warfare sensibility, arguing that, in order to avoid government infiltration, the white supremacist movement should organize in cells of five or fewer people — what would come to be known as “lone wolves” were best. “It becomes the responsibility of the individual to acquire the necessary skills and information as to what is to be done,” he wrote. Each “patriot” would have to make “a private decision in the quietness of his heart to resist: to resist by any means necessary.” Once the act was committed, the leaders of the groups could publicly disavow the violence — and avoid prosecution.
“No one need issue an order to anyone,” Mr. Beam wrote.
According to Stephen Jones, Timothy McVeigh’s defense lawyer, McVeigh told him that he had read “Leaderless Resistance” and that “clearly Louis Beam was someone that was very important to him.” The widely accepted narrative of McVeigh, who blew up the Alfred P. Murrah Federal Building in Oklahoma City in 1995, is that he was a loner Army veteran with a venomous disdain for the government. But it is not generally known how connected he was to the white supremacist movement. In their book, “American Terrorist,” based on a series of death row interviews with McVeigh, Lou Michel and Dan Herbeck wrote that McVeigh briefly was a member of the Klan, owned a white supremacist T-shirt, and sold at gun shows copies of the “The Turner Diaries,” the apocalyptic race-war novel foundational to the white power movement.

The authors also wrote that McVeigh had been captivated by the early internet and in high school “had converted his bedroom into a makeshift computer lab. Long before the internet became common in American homes, he owned not one but two Commodore 64s.” Though it is unclear if he ever visited Mr. Beam’s Liberty Net, the site was up and running as McVeigh explored the internet as a young man.

The Murrah building had long been a potential target for white supremacists. Kerry Noble had cased the premises with other C.S.A. members as early as 1983. They had even begun building bombs, but one of them exploded in a C.S.A. member’s hand, which the group considered a sign from God to wait. When McVeigh did carry out the bombing, Mr. Noble was working as a vacuum cleaner salesman in Texas. He saw the news on television and recognized the plot instantly. “They did it,” he remembered thinking. “They finally have done it.” In a legal irony, McVeigh’s defense team essentially argued what the prosecution in the Fort Smith trial had argued: that the bombing was orchestrated by a complex network of white supremacists and far-right militia members. According to Mr. Jones, three weeks before the bombing, McVeigh called someone living in Elohim City, a far-right compound in Eastern Oklahoma with connections to the C.S.A., the Aryan Nations and the Order. “His supply chain plus his travels indicated a fairly sophisticated group of people,” Mr. Jones said. “It was our opinion that most of the ones that he associated with were either the Midwest bank robbers or people at Elohim City.” He added: “I was convinced after talking to him, analyzing carefully what he said through numerous interviews, that he was trying to protect others, and assuming all the responsibility himself.” But only McVeigh and one immediate accomplice, Terry Nichols, were convicted in the bombing. The government’s case, Mr. Jones argued, missed a big part of the story.
“They never referred to Tim McVeigh as a terrorist,” Mr. Jones said. “It was a murder case. And so they avoided the political connotation.”’

In the early spring of 2018 I visited Elohim City for a series of articles about God in America.
The people in Elohim City were friendly, they denied, not surprisingly, that there was any connection between McVeigh and Elohim City.
David Millar, son of founder Robert Millar told us: ‘My father was a Mennonite in Canada, he had a vision that he should begin a community in Oklahoma.”

Elohim City is a combination of very particular Christianity and white supremacy.
In response to my question whether a Mexican could become a member of Elohim City the answer was: “If he is white.”

In these kinds of comunities almost always the federal government is seen as an enemy, an obstacle, or least something fundamentally unchristian.

Shortly after visiting Elohim City I had a vision that I should begin a community in Oklahoma as well. But because of Covid I postponed my plans.

Somehow, Oklahoma is a perfect state for visions.