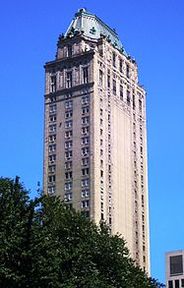 On luxury, affluence and the recent past - Jennifer Gonnerman in The New Yorker:

‘About eighty weddings took place at the Pierre in 2019. A certain subset of wealthy New Yorkers have attended numerous events at the hotel, and couples who’ve been married there have tried to transform the Grand Ballroom in ways that guaranteed that their wedding would not be forgotten. Sometimes, floral decorators have used netting to suspend thousands of flowers from the ceiling, so that guests felt as though they were standing beneath a garden.’

‘To some of the staff, the wedding on March 7, 2020, stood out because it was a “second-generation wedding”—the bride’s mother had also been married at the hotel, three decades earlier. Seventy-eight employees worked the event, including thirty-two banquet servers, who performed their usual ballet of speed-walking into the ballroom while balancing a tray of plates on one palm. The role of banquet servers can be intensely demanding: they present multicourse meals, often on a razor-tight schedule, providing, as the hotel promises, “flawless five-star service.” “It’s a very stressful job,” Laut said. “We have to live up to the name of the Pierre.” During the busy seasons at the hotel—the spring and the fall, leading up to the holidays—banquet servers might have to work double and triple shifts.

The March 7th wedding was the last large social event held at the Pierre. The city’s first case of covid-19 had been confirmed on March 1st, and by the second week of March fear had started to take hold among New Yorkers. The hotel’s workers were aggressively disinfecting surfaces and doorknobs.’

‘The Pierre opened in the fall of 1930, on the corner of East Sixty-first Street and Fifth Avenue, in a neighborhood already known for its concentration of luxury hotels. Next door was the Sherry-Netherland, and one block south, on the other side of Fifth Avenue, was the Plaza. Charles Pierre, a restaurateur who had grown up in Corsica, had persuaded some of the city’s wealthiest residents to fund the construction of the hotel. It stood out on the Manhattan skyline: a grayish-white tower rising forty-four stories, with a steep copper roof and its top floors modelled after the Royal Chapel at Versailles.

The hotel’s business plan relied on large events, especially débutante balls. In December of 1930, an A.P. story about the Pierre reported that “an estimated 180 girls will have ‘come out’ there during the season which began in October and ends in February. Their parties will average $3000 in cost, which is more than ½ million for the hotel” (about seven and a half million dollars today). Despite the Pierre’s auspicious start, the hotel went bankrupt after two years. In 1938, John Paul Getty bought it and increased the size of the ballroom. Two decades later, he converted some of the hotel’s suites into luxurious co-op apartments. The co-op owners and others bought the building, while Getty’s realty company continued to oversee the hotel’s operations.
In the seventies, Stanley Turkel was the executive vice-president of the 795 Fifth Avenue Corporation, which represents the co-op owners. By then, the Four Seasons ran the hotel, and the co-op owners were, as Turkel put it, “seventy-three of the wealthiest people in the world.” As at other co-op buildings in New York City, prospective owners required approval from a board of existing owners. “You couldn’t get an apartment if you had an inch of bad reputation,” recalled Turkel, who is now ninety-five and a well-known hotel historian. “The board would turn you down.”’

‘A new hotel typically sends out its laundry to be cleaned elsewhere, Luiggi explained, but at the Pierre “we do everything—all the sheets, all the towels, all the uniforms, the dry cleaning.” Gilberto Medina, the sixty-nine-year-old foreman of the laundry room, has held his job since 1981. Three of his siblings worked at the Pierre before he did, and one of his earliest memories is of dancing in the laundry room at five years old, when an older sister brought him in to show off his salsa moves. By now, Medina knows the laundry’s operations so well that he can detect a problem with a machine by a slight variation in its hum.
The most popular gathering place for the employees was the cafeteria, on the middle basement level. Before the hotel closed for the pandemic, the cafeteria was open twenty-four hours a day. Stefanie Schultz, a fifty-year-old room attendant, joined her fellow room attendants for lunch each day around noon. Beverly Footman, a telephone operator known as Operator Beverly, could be found catching up with about ten friends most afternoons at 2 p.m. The food was free, and there was a foosball table, two flat-screen televisions, and a massage chair. (Footman told me, “People were so excited to get in that chair.”) Luiggi said, “At the end of the day, to be a five-star hotel, you cannot have a big difference between the front of the house and the back of the house. It’s not ‘Downton Abbey.’ You cannot smile every day, work hard, and not have at least some of the comforts that are appropriate for what you do.”’

(…)
‘Reports of hotel workers dying of covid-19 flooded into the Hotel Trades Council. The union began posting obituaries on its Web site, including three for workers at the Pierre who died of the virus: Murtland McPherson, seventy-one, who had worked in the laundry room for twenty-nine years; Valentin Constantin, fifty-seven, a houseman who had worked at the Pierre since his early twenties; and Edward Fazio, sixty-two, who had been a storeroom attendant in the main kitchen for three years, after two decades at the Waldorf-Astoria. According to the Hotel Trades Council, about four hundred hotel workers in the union have died of covid-19.’

‘A few days before Christmas, I visited the Pierre. A security guard greeted me with a temperature gun. That day, the hotel’s occupancy rate was ten per cent—eighteen rooms were booked—and the lobby was so silent you could hear every footstep. Maurice Dancer, dressed in a black morning coat, stood with perfect posture at the concierge desk, behind a shield of plexiglass. If he found it depressing to look out at an empty lobby all day, he certainly did not show it. Even with a mask on, he managed to radiate charisma and warmth. “Are you enjoying the wonderful quiet of the Pierre?” he asked.
Luiggi, who met me in the lobby, was wearing a charcoal-colored suit and a white cotton mask. Like the hotel’s founder, he grew up in Corsica. He speaks with a French accent and has worked in hotels in Europe, but he has spent most of his career in New York City. (His résumé includes a stint at the Carlyle.) One of his employees described him to me as “very understanding.” “You would think in his position he’d be a little more on the arrogant side, but he’s not,” the employee said.
Luiggi led me down a hall, up a flight of stairs, and into the hotel’s Cotillion Room. The ceiling is nineteen feet high, and floor-to-ceiling windows line one wall, looking out onto Central Park. Al Pacino danced a memorable tango in this room in the film “Scent of a Woman.” The room can fit three hundred people, but in the previous nine months it had barely been used. On the day I visited, it was empty except for a grand piano. The sight of the deserted space unsettled Luiggi. “It’s very difficult,” he said.’

‘For those facing serious financial difficulties, the longer they are out of work, the further they sink into debt, falling behind on rent payments, mortgage payments, credit-card bills. Many laid-off hotel workers lost their health insurance at the end of 2020 and now have to pay for it themselves. The Hotel Trades Council provides free legal services, and some members have called asking for help filing for bankruptcy. But Sergio Dorval, the bartender, has noticed that the greatest source of stress among most of his co-workers seems to be existential. “They’re talking about their purpose in life, like ‘I feel useless,’ ” he said. “They’re not comfortable with just getting unemployment and staying home.” Luiggi is encouraged by the fact that the Pierre has thirty-two weddings scheduled for 2022. “So, it is coming back,” he said. “No one has given up on New York.” This past Valentine’s Day weekend, fifty-seven rooms were occupied. That month, the hotel held its first fifty-person event in nearly a year: a “micro bar mitzvah.” The ceremony took place at the Pierre; there was a dinner for guests in the Cotillion Room on Friday night and a lunch there on Saturday; and everyone spent the night at the hotel. “It was fabulous,” Bill Spinner, the hotel’s director of catering, told me. “People were so excited to be a part of an event and to be able to celebrate. I mean, it was all only family essentially, but I think people were surprised that they could actually do it.”’

‘Luiggi took me up to the thirty-ninth floor to see the hotel’s most expensive offering: the Presidential Suite, which costs as much as thirty thousand dollars a night. He unlocked a few doors and led me through the sprawling and elegant chambers—six bedrooms, seven bathrooms, and two living rooms, with a chandelier, a fireplace, and a soaking tub. A family visiting from abroad once paid half a million dollars to stay there for a month. Luiggi was not sure when the suite had last been occupied—“probably five minutes before the pandemic,” he said—but it appeared ready to pass inspection, with one exception: a very droopy dragon tree. With a diminished staff, it was not easy for the hotel to keep all its plants watered.
Wandering through the suite’s many rooms, it became apparent that its most dazzling feature was not its spacious layout or expensive furnishings but the enormous windows overlooking Central Park. From thirty-nine stories up, the piles of dirty snow on the streets below were almost invisible, and the view of the Park, with snow-topped trees, was mesmerizing. Standing before one window, taking in the view, Luiggi went silent for a moment. “I almost forget the pandemic,” he said.’

There is hope, thirty-two weddings scheduled for 2022.
And a presidential suite for thirty thousand dollars a night might be considered hope as well.

And work as purpose in life is usually underestimated by those who favor Universal Basis Income.

I never stayed at the Pierre, but I remember drinking cocktails in the bar on those Sunday afternoons not too long ago.
It was not quite the Carlyle, but there was more than enough to see. People watching is a reason to live, as long as you can afford a simple glass of white wine at The Pierre.