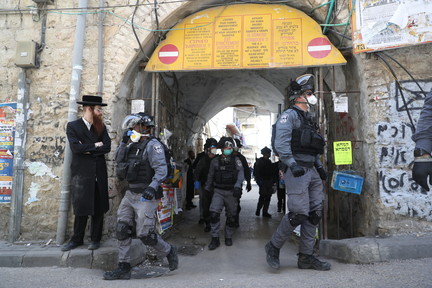 On being unhinged – Noga Tarnopolsky in WaPo:

‘Stuck in political purgatory, Israel has no budget, and it’s at risk of losing its international credit ratings. The Knesset is not operational, with the prime minister’s allies scrambling to reshape every rule and motion into a parachute that will save his political life. And the cabinet is incapacitated.
The crux of the problem for Netanyahu is that he is on trial, accused of bribery, fraud and breach of trust. On April 5, the first day of witness testimony, Netanyahu slammed Israel’s judiciary, calling the proceedings “an abuse of the destructive power held by the prosecution.”’

‘Netanyahu has until Tuesday to come up with a coalition. If he fails, Rivlin may call on the opposition leader to try, but Netanyahu is attempting to stymie that possibility and lead Israel to a fifth round of elections, entrenching Israel’s leadership crisis — and, crucially, preserving his position as caretaker prime minister for a few months more.
With that goal still out of reach, he is instead floating an outlandish proposal — to partially cancel the results of the March 23 election, detaching the party vote for Knesset from the vote for prime minister. This would allow him, personally, to run again for reelection with no parliamentary majority, in an alternative Israel in which he can change election laws on a whim. Mid-game, he’s asking for a mulligan.
Meanwhile, spooked by his trial and by the looming deadline, Netanyahu last week forced an illegal vote through his cabinet, “appointing” a political lackey justice minister. The point of this maneuver was to enable Ofir Akunis, currently the minister for regional cooperation, to control the appointment of a new state prosecutor, one of many essential jobs left empty by Israel’s political limbo. Netanyahu’s interest in imposing his will on the state prosecution needs no explanation. The full slate of Likud ministers, who like their leader no longer pretend to govern, ignored the attorney general’s exclamations about the illegality of the stunt and voted like automatons to confirm Akunis.
Among the state affairs that fell through the cracks was an urgently needed overhaul of services provided to wounded military veterans. The issue gained prominence after Itzik Saidian, a 26-year-old disabled veteran who fought in the 2014 war in Gaza, set himself on fire outside Israeli army headquarters April 13, the day before Israel’s Memorial Day.’

‘His bid to form a government depends on the support of Itamar Ben Gvir, a founder of Lehava and an unabashed fan of Baruch Goldstein, the Israeli American fanatic who murdered 29 Palestinian Muslims during the morning Ramadan prayers in Hebron, in the West Bank, in February 1994. Ben Gvir belongs to the Religious Zionism bloc led by Bezalel Smotrich, a racial supremacist who believes Jewish women should not have to give birth in the same wards as Arabs and openly espouses converting Israel into a theocracy.’

‘Yohanan Plesner, president of the Israel Democracy Institute, a nonpartisan Jerusalem think tank, said that “his retreat in the face of a Supreme Court ruling indicates that Netanyahu still has red lines that he is hesitant to cross, but if the political reality seems to be leading him out of office, we can be sure that these lines will quickly fade and the prime minister will undoubtedly test the limits of Israel’s precarious constitutional structure.”

The backbone of Israel's tech economy remains solid, and the country is rightly proud of its hugely successful vaccination campaign, but it is impossible to overstate the precariousness of Israel’s predicament.
“What we’ve seen in the last two weeks is a spectacularly dangerous meltdown of the only prime minister in the history of democracies who has declared and waged war on his own country, it’s constitution, processes, institutions, judiciary, checks and balances,” said Alon Pinkas, Israel’s former consul general in New York who served in the Labor government of Prime Minister Ehud Barak.’

‘Netanyahu may have abandoned Israel and Israelis, but his efforts to save himself are undying. On Monday, even in the dwindling, final hours of Netanyahu’s mandate, loyal wingman Miki Zohar, the Likud Knesset faction chair, announced a new bill for the legislative agenda. It would allow for the direct election of a prime minister.’

One could argue that Trump also tried to wage war against his own country, but compared to Netanyahu Trump is more a small-time operator.

How Israel is going to get rid of Netanyahu remains to be seen.

An important part of the Israeli electorate keeps voting for Netanyahu.

And the longing for a theocracy or a theocracy-light will undoubtedly survive Netanyahu, but I remain rather optimistic, or at least I don’t see thinks that the Apocalypse is closer than ever, and civil war is close by.

My experience is: even believers have desires outside the realm of the theocracy.