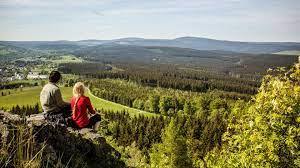 ‘On the political map of Germany, large chunks of Saxony and Thuringia have taken on the light-blue hue associated with the right-wing radical party Alternative for Germany (AfD). In both states, the AfD – which is suspected of right-wing extremist proclivities by the Federal Office for the Protection of the Constitution, Germany’s domestic intelligence agency – received more votes than any other party. It won 24.6 percent of the vote in Saxony and 24 percent in Thuringia. The center-right Christian Democrats, who held a tight grip on political power in the two states for years, were left in the dust.’

‘But it is also true that the overwhelming majority of eastern German voters did not vote for the AfD last Sunday. The right-wingers in Saxony did win a number of seats in parliament behind the leadership of lead candidate Tino Chrupalla, but over all they lost votes compared to the last general election. AfD blue has only rolled over the election maps of the region because the Christian Democrats (CDU) and the Left Party both lost significant amounts of support.’

‘In those interviews, Vorländer emphasizes that eastern Germany is far from homogenous. The northern part of former East Germany votes differently than the south. The right-wing, for example, is more concentrated in the Ore Mountains (Erzgebirge) of Saxony, a state of affairs for which Vorländer recently found even more evidence in a study on the coronavirus. The region, he says, is more likely to support the AfD and more likely to adhere to conspiracy theories. Indeed, it is a stronghold of anti-vaxxers. "They are rather particular mentalities with a high degree of rebelliousness, intransigence and defiance.”

The narrow valleys of the Ore Mountains are home to this specifically Saxon brand of obstinacy, and has been for a very long time, as regional literature attests to. Furthermore, the region is relatively intact, having suffered less from demographic challenges and brain drain than other parts of eastern Germany. "But there are hermetically sealed communities that function like bubbles,” Vorländer says. Normal political voices hardly ever make an appearance.

Some political groups have sought to take advantage, such as the Free Saxons. The party was founded early this year in the Ore Mountains town of Schwarzenberg. State security officials consider it to be a right-wing extremist group. Ostensibly, officials say, the party is primarily focused on corona protests and "fighting for freedom,” but in reality, its main message is disdain for the state. According to Vorländer, self-reaffirming sociotopes have developed.’

‘In southern Thuringia, by contrast, Hans-Georg Maassen ran for the CDU, a man who is on the far-right wing of the party and who Thuringia’s extremist AfD chapter head Björn Höcke has praised for having "a lot in common” with the AfD. But Maassen’s candidacy went nowhere. Not only did he lose to the SPD candidate, but the local AfD candidate hardly lost any votes at all to Maassen, despite the CDU candidate’s extremely high name recognition after spending years as the head of the Federal Office for the Protection of the Constitution.’

‘That, though, is something the party has tried before. In the last four years, Kretschmer has held almost 90 events of different formats, all of which were aimed at establishing a more direct line of communication with voters. They included state cabinet members, regional leaders and mayors. The effort, though, didn’t seem to help much in the voting booth and Kretschmer constantly found himself confronted with significant resistance. In Freiberg, for example, he and his retinue were besieged by a group of Free Saxons – to the point that they ran over the foot of a female police officer during their hasty escape.
Still, Vorländer believes that Kretschmer’s strategy was ultimately the correct one. He believes the CDU should make sure they are present throughout the region and invest heavily in meeting voters’ needs for a fatherly figure at the top. You have to go to the places "where it hurts,” he says.’

The explanations why the southern part of eastern Germany votes so differently from the northern part are not completely convincing. Hermetically sealed communities, okay, but why do these communities detest the state? Religion doesn’t seem to play a role, unlike in the US where the federal state is seen as the antichrist by certain religious communities.

The hatred against the state and everything that symbolizes the state (establishment, elite), the love for conspiracy theories, Covid and the vaccines, a rather shallow but at the same time passionate anti-capitalism, these are all symptoms that are not specific for Saxony, they can be found in extreme-right political parties in the Netherlands, in the US, in France, although there parts of the left appears to detest the covid policies of Macron as much as the extreme right elsewhere hates the covid policies of their respective governments.

The fact that the themes that are important to the AfD (Muslims, asylum seekers, terrorism, what does it mean to be German, Jews, et cetera) didn’t play role in the political campaign in Germany is a sign that there is some consensus among the other parties: the best way to defeat the Afd is to ignore the AfD.