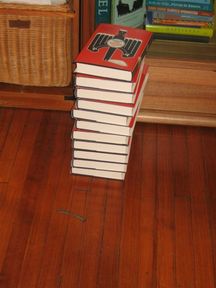 Last night I did a reading (and conversation) organized by the magazine Habitus.
Joshua, editor and founder of the magazine, had asked me to bring some copies of “The Jewish Messiah”. He had received ten copies from Penguin, but he was afraid that that wouldn’t be enough.
I still had a number of my books piled up in my living room, so I answered: “No problem, I’ll bring nine or ten copies.” In the late afternoon I used my godson’s buggy as a small suitcase on wheels and I transported the books, together with my godson and his mother, to the Bronfman Center on 10th Street.
I enjoyed the conversation with Joshua, I signed a few books, but the ten copies Penguin had handed out would have been enough.
After the event Joshua said to me over pizza: “You are not interested in living a celebrity life aren’t you?” I looked at the buggy with my books and I answered: “If you are interested in such a life it means you have ceased to exist as a novelist.”