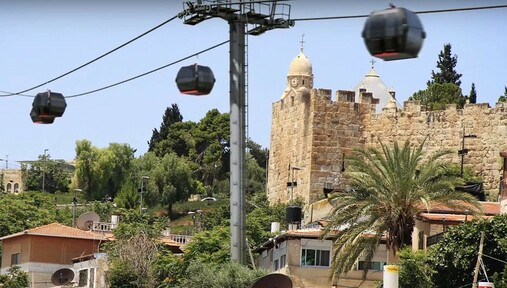 On Jerusalem – Anshel Pfeffer in Haaretz:

‘Israeli sovereignty in Jerusalem is a joke when 58 percent of the children in the city live beneath the poverty line and when most of its students don’t even study at schools which equip them with the basic skills for employment in the 21st century. Where urban planning, social and educational policies are non-existent for the Palestinian third of the city, and ignored in the ultra-Orthodox third.

The world turned its attention for a brief moment towards Jerusalem and towards the Israel-Palestine conflict following Shireen Abu Akleh’s killing, and gasped at the brutality of police officers attacking her funeral procession.
Those weren’t the scenes the Israeli government wanted to see there, but that’s what they get when for the past 55 years, on every government’s watch since Israel "reunited" the city, it’s been "policed," not as one city but three separate ones – with normal policing in the "regular" neighborhoods, no policing in the Haredi quarters, as we saw during the pandemic when Covid-19 lockdowns were openly flouted there, and a paramilitary force for the Palestinian eastern part of the city.
Israel isn’t trying to "Judaize" Jerusalem. Israel doesn’t really care about an actual Jerusalem. Beyond hollow statements, Israel is simply trying to Disney-fy Jerusalem, so that tourists can be whisked between a few monuments and shrines. Israel has total disregard for those living in Jerusalem, except for the residents of a few pleasant enclaves in the western part of the city.
If Israel was actually serious about making Israel its capital, it wouldn’t just throw money at the ultra-Orthodox and armed police at the Palestinians, and it certainly wouldn’t be planning pie-in-the-sky cable-cars instead of a modern mass-transport system.
The Jerusalem of "Jerusalem Day" doesn’t exist. It’s just the lip-service paid by politicians to a city they’ve long ago abandoned.’

The Disneyfication of Jerusalem, the desire to satisfy the tourist, while ignoring the undesirable citizens living there, is part of the cynicism, common everywhere, but for many reasons more in-your-face in Israel.

Enjoyment is for the tourists and the happy few, poverty is good for the locals.

Maybe one day the Haredim and the Palestinians will acknowledge that they, as second and three class citizens, could fight together for slightly more justice. But probably I won’t witness it, maybe my son. History is filled with surprises.