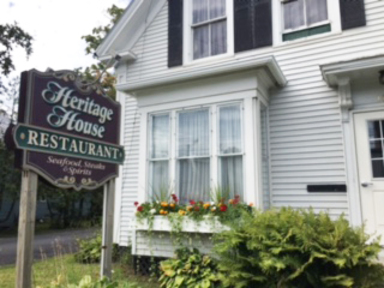 An unexpected moment of bliss occurred this afternoon in the town of Skowhegan. We stopped for lunch in the Heritage House. The restaurant was empty, just two elderly ladies were drinking cocktails at the bar. Later they had lunch two tables next to us, also a Canadian family stopped also for lunch there, but these Canadians were for reasons unknown to me grumpy.
The atmosphere in the restaurant was timeless, it could have been 1952 there or 1974, it was clearly a family owned business, which added to the charm. No franchise, not one attempt was made to show the customer that the 21st century was well on its way.
The food was simple but delicious, and not expensive, the service was heartwarming, the busboy was a kid, I assume a grandson of the owner. He had the eyes of a deer.
Just because of the Heritage House I could spend a month or maybe even a season in Skowhegan.
Maine, needless to say, is an excellent state to spend your summer, but till now only the Heritage House and Skowhegan stole my heart. Also, because there was a sense of mystery to the town and the restaurant. Not the mystery of a crime, maybe also that, but the mystery of living outside time, outside globalization, and I’m not opposed to globalization.