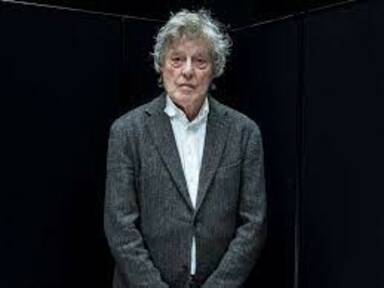 A friend urged me to read this interview with Tom Stoppard in NYT. It’s delightful:

‘When I was writing the play, there was a kind of local disturbance concerning antisemitism in the British Labour Party, and it didn’t seem to be an overriding problem, and I kind of ignored it. It seemed to be not widespread. I’m not sure whether that would apply anymore.’

.
‘So what, to your mind, would be the best response to antisemitism? I have absolutely no doubt what the solution is, but it’s very long term, and it’s not a solution that you can simply adopt. The solution is to develop a society in which these issues barely arise because the society is fair. In many issues, I think, God, if only we could start education again from the bottom up.’

‘I just live my life and let the Jewishness take care of itself.’

‘I’ll admit that I’m slightly skeptical that your art and your sense of self are as cleanly separate as you’re suggesting. I’m always interested in who I am and why. What I’m writing about, as a dramatist or writer of fiction, is something that happens in parallel to that. Tell me, all well in your family, David? Are you married? You a happy man? OK, we can change the subject. Yes, I am married and yes I’m extremely happy, knock on wood. That is good news. It is so nice to meet somebody who says that.

‘So many of your plays use a philosophical or scientific idea as a central metaphor, whether it’s chaos theory in “Arcadia” or quantum mechanics in “Hapgood.” Is there a particular idea or theory that you’re intrigued by now? Moral realism. The conviction that good and evil, that just society and unjust, that our conception of such things is based on more than subjective preference. We’re accepting the idea of good and its opposite as objective moral realities. I don’t know how you could possibly begin to justify such a hypothesis, but it’s one that gives you plenty of food for thought, and I like thinking. For me, it’s difficult to avoid circularity. If you say to me, “Do unto others as you would wish everybody to do unto others,” then I say to you, “Why is that good?” The answer seems to veer toward society being a functioning possibility instead of anarchic dystopia. I can see that that would be an objective good, to have a society which operates from a kind of competition of generosity. But this has already gotten abstract just in talking to you about it. I don’t know that I would actually pursue the subject as a playwright. As I said before, unless you have a conventional story about people to tell then you might as well write an essay.’

‘You said before that you’re worried about the whole catastrophe. What do you do with your worry? I’m afraid I suppress it. Push it aside. It’s just something that sideswipes me every now and again. I do hope that there’s some kind of self-correction happening, that the planet and the civilization — I don’t know quite what I mean by self-correction, but I hope good things happen as well as bad things. You know, I’m told there is such a thing as the long view. But it never seems quite long enough to cope with the horizon.’

Stoppard begins as an old-fashioned Enlightenment optimist, education is the cure for everything, but he ends as a good-old ironist – some people insist that there is such a thing as a long view – in between he appears be to good at witticisms. No surprise of course. Let the Jewishness take care of itself. Don’t worry about your identity, it takes care of itself. Keep that in mind and certain forms of Enlightenment will automatically follow.