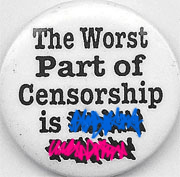 Back in 1997 I started a biweekly column for a Dutch newspaper (Grunberg around the world) about my travels, my life and anything else I deemed interesting enough to write about.
I strived for honesty that bordered on recklessness. I noticed that people would say to me during a private conversation: “This is off the record.” One of my ex-girlfriends was first angry that I wrote more about my mother than about her, then she was angry that I wrote about her, and finally she was angry period.
My mother would often say during conversations on the phone: “Please, don’t put this in the newspaper.” Maybe secretly she hoped that all our conversations would make it into the newspaper.
Although the readership of this site is considerably lower than that of the Dutch newspaper I’m very much aware of the fact that this medium makes news travel faster. (My articles for the newspaper are not easily accessible online and they are in Dutch.)
An author tends to be barbaric in the sense that most authors I know think of their surroundings as fair game for their work. (Those who don’t are usually not very interesting authors, maybe better humans beings but worse novelists.)
Nevertheless I believe that people have reason to expect that a private conversation is off the record.
That’s why I try – at least on this place – to be discreet, as regular readers might have noticed.
For a novel the rules of the game change.