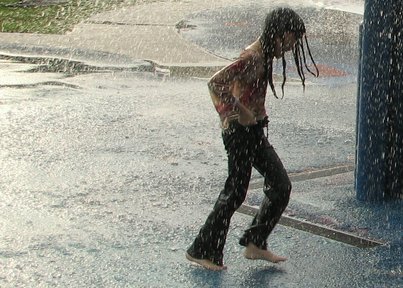 On the last day of our trip my companion insisted on renting a convertible and driving to Naples.
I like to please my companions as long as they are around, although I very much feared second-degree-burns. When it comes to pleasing a companion and a second-degree-burn the choice is not that difficult.
On the way back we had a late dinner in the old city of Terracina. Around 22:30 the garden of the restaurant was still packed.
Twenty minutes later a tempest started and the guests were running to take shelter in the restaurant, which was much too small for all the guests.
Inside it felt like being on the bus on a rainy day in NYC.
But of course there were significant differences. People started eating each other’s food, connections were being made and napkins were being used as towels.
“Are you happy now?” I asked my companion.