Nothing on you will grow again 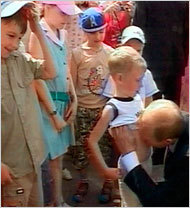 Vladimir Putin is definitely one of the more theatrical world leaders. In yesterday’s Herald Tribune Ellen Barry writes about Putin’s remarks on a critical French journalist: ‘In 2002, when a French reporter faulted Russia for killing innocent civilians in Chechnya, he [Putin] suggested that if the reporter were so sympathetic to Muslims, he could arrange to have him circumcised. "I will recommend to conduct the operation so that nothing on you will grow again," he said.’ It seems to me that Mr. Putin was ready to circumcise this reporter right away, and even more so that it was not the first time he had used the knife. Or the scissors, I’m not sure what Mr. Putin prefers.
I wonder how many journalists Mr. Putin circumcised single-handely.