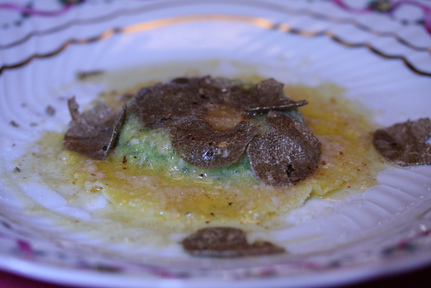 Last night after having seen the movie “Vicky Cristina Barcelona” for the second time I went with a good friend of mine to Barolo, if for no other reason than to enjoy the garden.
To my surprise I was greeted by the sommelier of San Domenico.
Now San Domenico on Central Park South has a special place in my heart.
I was introduced to San Domenico by my former fiancée Elayne in 1999 and for a while I had the habit of taking women (and men) to San Domenico for the tasting menu.
Often the daughter of the owner would say: “Ah, Mr. Grunberg, another tasting menu tonight.” The hint of irony didn’t escape me but it was a hint with which I could live very well.
The sommelier at San Domenico always reminded me of an actor in a Molière play.
Recently I stopped going to San Domenico on a regular basis. The need for tasting menu’s had faded away.
Last night the sommelier at Barolo told met hat San Domenico has closed.
This is another reason for melancholy, I’ll think of the tasting menus of San Domenico, and the women and men who tasted these menus -- and who have all but one or two disappeared from my life.