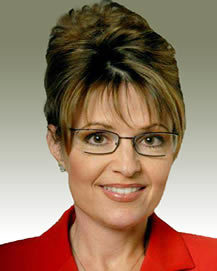 Gail Collins, columnist for the NY Times has an exquisite sense of humor: “It is conceivable that some people will think John McCain picked Sarah Palin to be his running mate because she is a woman. I know you find this shocking, but I swear I have heard it mentioned. (...)
John McCain has a low opinion of the vice presidency, which he’s frequently described as a job that involves attending funerals and checking on the health of the president. (Happy 72nd birthday, John!) There’s a lot we don’t know yet about Palin, and I am personally looking forward to deconstructing her role in the Matanuska Maid Dairy closing crisis. But at first glance, she doesn’t seem much less qualified than Tim Pawlenty, the governor of Minnesota who most people thought was the most likely pick. Unlike Joe Lieberman, Palin is a member of the same party as the presidential candidate. And unlike Mitt Romney, she has never gone on vacation with the family dog strapped to the roof of the car.”

I must admit that I completely missed the story about Mitt Romney strapping the family dog to the roof of his car while going on vacation.
Two things I try to avoid in life: my own car and a family dog.