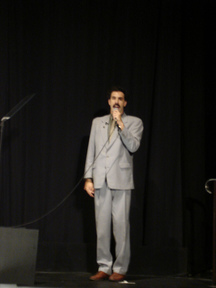 David Brooks today in the International Herald Tribune: “The genius of Sacha Baron Cohen's performance is his sycophantic reverence for his audience, his refusal to challenge the sacred cows of the educated bourgeoisie. During the movie, Borat ridicules Pentecostals, gun owners, car dealers, hicks, humorless feminists, the Southern gentry, Southern frat boys and rodeo cowboys. A safer list is impossible to imagine.” And also: “We've democratized snobbery and turned it into a consumption item for the vast educated class.”

For once I happen to agree with Mr. Brooks. For god’s sake, let’s not democratize snobbery.
But what are the sacred cows of the educated bourgeoisie?

Would it be possible to argue that president Bush is the savior of the world without falling into the traps of cheap irony? I very much hope so.
Let me say it loud and clear: Bush is my man.